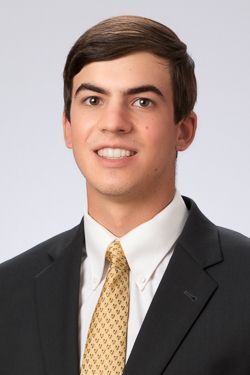 2020-21: Earned All-MVC honors for a second consecutive season… Tabbed the MVC Scholar-Athlete of the Year… Named the MVC Elite 17 Award winner, a prestigious honor that is presented to the individual with the highest grade point average among the top finishers at the MVC Championship… Posted a team-best 72.59 scoring average while golfing all 22 rounds over eight events… Turned in five top-5 finishes while boasting a team-best nine rounds of par or better… Named the MVC Golfer of the Week on three occasions… Finished with the second-best single-season scoring average in the program’s modern history (since its 2009 relaunch), narrowly missing his own mark of 72.57 from 2019-20… Finished his sophomore season atop the Valpo record book in career scoring average at 72.58… Had a team season-low round of 68 (-4) in the second round of the Lewis Flyer Intercollegiate on Sept. 28… Went on to post three more rounds of 68 during the season: Round 1 at Twin Oaks (March 22), Round 3 at Wright State (Aug. 19) and Round 2 at Butler (March 29)… Earned individual runner-up honors in a 108-player field and led the team with a 209 (-4) at the Twins Oaks Intercollegiate (March 22-23). That ranked tied for fourth in modern program history in 54-hole individual low in terms of overall score and tied for seventh in relation to par… Again led the team and posted his second straight individual runner-up nod, this time in a 70-player field at the Butler Spring Invitational (March 29-30). His 54-hole score of 210 (E) ranked tied for sixth in program history in overall score… Earned his first career individual medalist honor in the 87-player Wright State Invitational (April 18-19) by turning in a 210 (-3), again tied for sixth in 54-hole tournament low and tied for 10th in relation to par. That marked his third straight tournament as either an individual runner-up or medalist… Only two individuals in the program’s modern history (Nick Seitz once, Peter Webb three times) had achieved 54-hole scores of 210 or better before VanArragon did it in three straight tournaments… Led the team with his fifth top-5 finish of the year at the MVC Championship (April 26-27) in Flossmoor, carding a 224 over 54 holes… The performance in Flossmoor marked his ninth career top-10 finish… Earned MVC Commissioner’s Academic Excellence Award, MVC Academic Honor Roll and Valparaiso University Presidential Academic Honors… Named College of Arts & Sciences Dean’s Award recipient, an honor presented annually to the student-athlete with the highest GPA in the College of Arts & Sciences... Named the Valparaiso University Bill Steinbrecher Sportsmanship Award winner as part of the department's annual ARC Awards.