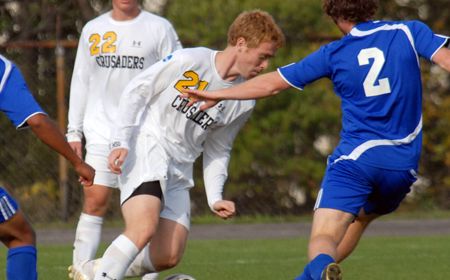 Brendan Roth scored the second goal of the game for the Crusaders. (Ray Acevedo)
Related Links

"Tonight was exactly what we needed, as it was the first time in preseason that we faced the real pressure of an opponent,” said Crusader head coach Mike Avery.  “For the most part I thought we handled it pretty well, but at times showed areas we need to work on.  Hopefully now with a week of training, we can learn lessons from today and be better the next time we step on the field.”

The Crusaders, who played just over 12 minutes in their opening exhibition matchup on Wednesday due to weather, needed just that amount of time to score on Saturday, as in the 13th minute, Rodolfo Lucas (Mogi Mirim, Brazil/ [Coffeyville C.C.]) put a well-placed corner into the middle of the box, where Stefan Antonijevic (Buffalo Grove, Ill./Stevenson [College of Lake County/Marquette]) used his 6’6” frame to get above the crowd and head the ball into the back of the net.

The Golden Eagles responded less than two minutes later, when Dan Addis picked up the ball 20 yards out after an attempted clear and fired it inside the left post.  But the Crusaders regained the lead in the 27th minute, as Brendan Roth (Elkhart, Ind./Memorial) put pressure on the Marquette keeper, who had come outside the box to play a ball.  Roth stole the ball away from the goalie and easily found the back of the wide-open net from 20 yards to make it 2-1 Valpo, a score that would hold up into the half.

Marquette knotted up the match with what proved to be the game’s final tally just 32 seconds into the second half, when Matt Leonard crossed a ball into Andrew Krynski, who converted from ten yards out on the right side to tie it at 2.  Valpo put four shots on goal in the second half, but they were all saved by Golden Eagle netminder David Check, including a big stop on Lyons in the box with under four minutes to play.  The two squads did not play any overtime.

Valpo out-shot Marquette, which entered the contest coming off of a tie against #22 Michigan, by a 12-8 margin and put nine shots on net to the Golden Eagles’ three.  Ryan Schwarz (Rockford, Ill./Boylan Catholic) played the entire match in net for the Crusaders, his first appearance on the pitch since the 2007 season, while Keenan Flynn and Check each played a half in goal for Marquette.

Valparaiso concludes the exhibition season next Saturday, August 29, when the Crusaders travel to Western Illinois.  Kickoff is slated for 1 p.m.