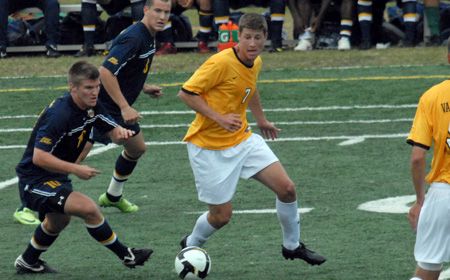 Clayton Lyons found the back of the net for the Crusaders on Saturday afternoon. (Ray Acevedo)

A late first-half goal by Clayton Lyons (Louisville, Ky./Trinity) was all the scoring Valparaiso would need Saturday afternoon in its exhibition finale, as the Crusaders defeated Western Illinois by a 1-0 count in Macomb, Ill.

“I thought we played well today in a pretty even match,” said Crusader head coach Mike Avery.  “We haven’t reached our potential yet, but we were definitely better today than we were last time, and that’s what you look for in the preseason is improvement from week to week.”

Lyons found the back of the net for the only goal of the game in the 43rd minute of play.  Freshman b(Naperville, Ill./Neuqua Valley) sent a long cross to the right side of the box where Lyons picked it up and sent it past the Westerwind goalkeeper for the eventual match-winner.

The Crusaders had a number of other solid scoring chances, most notably a pair of opportunities from Rodolfo Lucas (Mogi Mirim, Brazil/ [Coffevyille C.C.]) in the second half, but while they never converted for an insurance tally, it proved to be unnecessary.  Western Illinois’ best chance at the game-tying goal came late in the second half, but Ryan Schwarz (Rockford, Ill./Boylan Catholic) made a nice stop to preserve the shutout.

“Ryan and Kyle Zobeck (Coralville, Iowa/Iowa City West) each played a half in net for us and both had some nice plays,” said Avery.  “It was just a good all-around day in goal.  We also got some good individual performances out of some of our youngsters, including Jaymie and also Nick Lincoln (East Thetford, Vt./Kimball Union [N.H.] H.S.), who played 90 minutes in the middle back for us.  All in all, it was a good day and now we look to recover for our season opener.”

Valparaiso closes its exhibition campaign at 1-0-1 and opens the regular season on Tuesday, Sept. 1, as the Crusaders travel to Eastern Illinois to face off against the Panthers.  Kickoff from Charleston is set for 5 p.m., and a live stats link is available at www.valpoathletics.com.