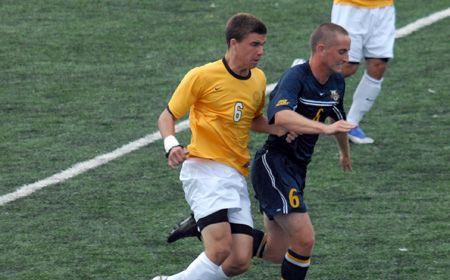 Freshman Jaymie Bullard (Naperville, Ill./Neuqua Valley) found the back of the net twice on Tuesday evening in his first career game, while Ryan Schwarz (Rockford, Ill./Boylan Catholic) returned to the goalkeeper position for the first time since the 2007 campaign with a shutout as Valparaiso won its season opener over Eastern Illinois by a 2-0 count in Charleston, Ill.

The win marked the Crusaders' second straight win over the Panthers, coming in the last two season openers, after going 1-10-1 against EIU in the program's first 20 years.  Bullard’s pair of goals marked the first multi-goal game by a Crusader since Shively posted a pair of markers against Western Michigan last season on Sept. 21, and the first such game by a freshman since Paul Leitelt in 2005.

"Today was obviously a really good way to start the season," said Crusader head coach Mike Avery.  "Eastern Illinois is a good side, and to come on the road to their place and get a good result is a really nice start for us."

The eventual match-winning goal came very early on, as just inside the fourth minute, Ken Perkins (Cedar Rapids, Iowa/Kennedy) crossed a ball across the box from the right-hand side of the pitch.  Bullard was there to receive the pass and took what Avery called a "great strike, just a really well-taken goal" to put Valpo ahead by a 1-0 count.

That score would mark the game's only tally until the middle portion of the second half, when the Crusaders took control for good with a key insurance goal.  Senior Steve Shively (Indianapolis, Ind./North Central) found Bullard in the middle of the box at point-blank range, and the freshman converted, putting the ball into the right side of the net for his second goal of the game.

"Jaymie was terrific for us today, not only on his two finishes, but he played very well over the course of the entire game," said Avery.  "His first goal gave us a lot of confidence, and we handled the game pretty well from that point on.  His second goal just put the game away for us."

Schwarz was stellar in his return to the pitch for the Crusaders after being forced to medically redshirt last season due to injury.  The redshirt junior made four saves in earning his seventh career shutout, tied for third-most in Crusader history.

"With Nick Lincoln (East Thetford, Vt./Kimball Union (N.H.) Academy) and Connor Cappelletti (Kent, Wash./Bob Jones (Ala.) H.S. [Wallace State C.C.]) playing next to each other in the back today, both making their D-1 debuts, we needed Ryan to come be big today, and he was," said Avery.  "Eastern is a very direct team, playing a lot of balls into the box, especially after we came out and took the lead early.  Ryan handled their pressure tremendously, coming out and just owning the box."

"Stefan Antonijevic (Buffalo Grove, Ill./Stevenson [College of Lake County/Marquette] was a really good presence for us in the middle of the field today," concluded Avery.  "We also got really good minutes in the middle from Wei Ming Wong (Hong Kong/ [SMU]), who stepped up when we needed him tonight despite not taking the pitch during the preseason."

The Crusaders owned a slight 14-13 advantage in shot attempts over Eastern Illinois (0-1-0), and put seven shots on frame to the Panthers' four.  EIU netminder Sean Molony made four saves in goal in the losing effort.

Valparaiso (1-0-0) returns home for a showdown with #22 Michigan at Brown Field on Sunday, Sept. 6 at 5 p.m.  The Crusaders will be raising money, new medical supplies and gently-used soccer equipment at the game as they partner with TOCO to help launch the "Sneakers Not Wheelchairs" campaign to help target the diabetes crisis in St. Lucia.  For those who cannot make it to the game, donations are welcome through the mail throughout the season.  The game will be broadcast live on WVUR, 95.1 FM, Valparaiso and online at www.valpoathletics.com, which will also have a link for live stats.