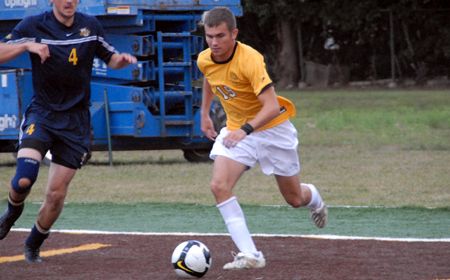 Down a man early in the first overtime session, Valparaiso’s Wei Ming Wong (Hong Kong/Hong Kong International [SMU]) was fouled in the box, resulting in a Crusader penalty kick that Zack Stivers (Brownsburg, Ind./Brownsburg) converted to give Valpo a 2-1 overtime victory over IUPUI Sunday afternoon at Brown Field.

“Even though today wasn’t our cleanest day in terms of how we played, I’m proud of the way our guys hung in there and found a way to get a result against a tough IUPUI team,” said Crusader head coach Mike Avery.  “On an individual level, Adrian Ortiz (Berwyn, Ill./Morton West) was fantastic on the back line for us today and Ryan Schwarz (Rockford, Ill./Boylan Catholic) was very good in net as well.  We needed a strong defensive presence, again because it wasn’t our cleanest effort today with the ball going forward.”

Valpo was sent down to ten men in the 89th minute of regulation, but the Crusaders were never seriously threatened by the Jaguars during the four minutes they spent down a man, as IUPUI got off just one shot during the time frame.  Wong was taken down in the box from behind by a Jaguar defender after a nice pass ahead from Nick Lincoln (East Thetford, Vt./Kimball Union (N.H.) Academy) on the counter-attack, and Stivers stepped up with his second goal of the season and the second penalty kick conversion of his career.

The Crusaders controlled the first half of play, outshooting IUPUI 9-3 in the opening stanza.  Connor Cappelletti (Kent, Wash./Bob Jones (Ala.) H.S. [Wallace State C.C.]) nearly put Valpo on the scoreboard with a header off a corner in the 17th  It looked for a while like the game might go into the half scoreless, but Stefan Antonijevic (Buffalo Grove, Ill./Stevenson [College of Lake County/Marquette] put the Crusaders ahead in the 42nd minute, picking up a loose ball in the box and firing a shot into the right side of the net from 14 yards out. minute, but a Jaguar defender was on the goal line to clear the ball away.

The Jaguars got the equalizer in the 57th minute from Kyle Gentile, who took a free kick from the left flank 27 yards out that deflected off the head of a Crusader defender, changing direction and sending it into the right-hand side of the net.  Gentile had another big opportunity in the 68th minute with the ball in the box and an open net, but Cappelletti was in perfect position to step off the goal line and in front of the shot to keep it knotted up at one.  Stivers had Valpo’s best scoring chance late in the second half on a 2-on-1 break that turned into a 1-on-1 with IUPUI netminder Tyler Keever, but Keever was able to punch away the attempt.

Valpo owned a 15-11 advantage in shot attempts on the game over IUPUI (1-3-1) and put eight shots on net to the Jaguars’ three.  Keever made five saves in the losing effort, while Schwarz needed to make just one stop for the win.

“I thought Keever was fantastic in goal for IUPUI,” said Avery.  “He made two or three key saves that really could have changed the whole flow of the game.  Now our greatest challenge is another short turnaround as we prepare to go on the road on Wednesday.”

Valparaiso (2-2-0) returns to the pitch on Wednesday afternoon, as it makes the short trip up to Kalamazoo to take on Western Michigan.  Kickoff is slated for 3 p.m. CDT.