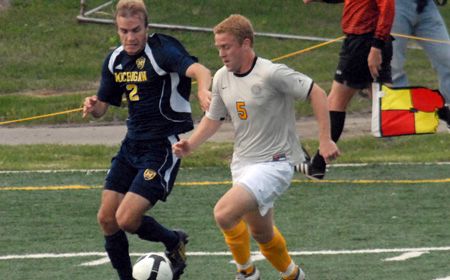 This time, the goal came during the run of play, but other than that, the Valparaiso men’s soccer team ended Wednesday’s game at Western Michigan the same way its last contest ended: a Zack Stivers (Brownsburg, Ind./Brownsburg) marker in the first overtime giving the Crusaders a 2-1 victory.

“Wednesday afternoon games on the road are always difficult,” said Crusader head coach Mike Avery.  “We came in today and faced a Western Michigan squad which played a very physically tough game, with lots of energy throughout.  We knew we had to be both patient and persistent today, and we were both, and it paid off with a chance we converted on in overtime.  I’m really proud of the guys today for a good win.”

The eventual game-winning play began when Steve Shively (Indianapolis, Ind./North Central) fed Brendan Roth (Elkhart, Ind./Memorial) on the left flank in the 96th minute.  Roth immediately touched it back to Shively, who served the ball into the box.  Stivers was waiting there and volleyed the ball inside the near post for his team-high third goal of the season and second straight match-winner.

Valpo got on the board first in the 22nd minute with reversed roles.  After a punt ahead by Ryan Schwarz (Rockford, Ill./Boylan Catholic), Stivers eventually gained possession and flicked the ball ahead to Roth, who found himself one-on-one with WMU netminder Cody Camp.  The redshirt sophomore eluded Camp and found the back of the net for his first goal in the Crusader kit.

Western Michigan would knot up the match midway through the second half in the 66th minute, when Remi Sanderford chipped a ball in for Saeed Sulemana Baba, who headed it in from the right side for the equalizer.  Neither side would put another shot on goal until the second minute of the extra session, when Schwarz made a save on WMU’s Tyler Rosenhagen, while Valpo’s next shot on frame resulted in the match-winner.

Valparaiso held a slight 9-8 advantage in shot attempts over Western Michigan (0-5-0) and put seven shots on goal to the Broncos’ three.  Schwarz made two saves in the winning effort, while Camp stopped five shots.

“We played a lot of guys today because of the number of games we’ve had in a short period of time,” said Avery.  “We really relied on our depth, and everybody that stepped on the field did a good job for us.  In particular, Jonathon Smith (McKinney, Texas/McKinney) played his first minutes of the season today at right back and really did a nice job.”

Valparaiso (3-2-0) closes out the pre-league portion of its schedule at Brown Field on Sunday when the Crusaders host Saint Francis (Pa.).  Game time is scheduled for 1 p.m., and all the action can be heard live on WVUR, 95.1 FM, Valparaiso and online at www.valpoathletics.com, which will also have a link for live stats.