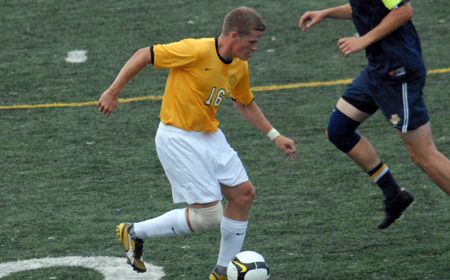 An early two-goal deficit was too much for the Valparaiso men’s soccer team to overcome Sunday afternoon at Brown Field, as despite a late first-half goal by Kevin Miller (Jefferson City, Mo./Helias) in his Crusader debut, Valpo fell to Saint Francis (Pa.) by a 2-1 count.

“Two things caught up with us today - first, Saint Francis is a good team and scored two very good goals early on that put us under some early pressure, and second, our third game of the week had us not quite as sharp as we can be,” said Crusader head coach Mike Avery.  “Full credit goes to Saint Francis, though.  They are a well-coached group that is tough in the middle of the back, and when the game became one where we were chasing, the game played into their two central defenders’ strengths.”

The Red Flash needed very little time to gain its early advantage.  In the game’s eighth minute, Sean O’Reilly sent a ball into the box that Daniel Moir won the battle for against a Crusader defender.  Moir fired a shot from about ten yards out that found its way into the lower right portion of the net to give Saint Francis the lead.

Then, less than three minutes later, the Red Flash struck again.  David Butler set up Parnell Hegngi in the middle-left portion of the field about 25 yards out.  Hegngi fired a shot towards the upper left corner that struck the underneath portion of the crossbar and ricocheted down into the net to put Saint Francis ahead by two goals.

Valpo would get right back into the game in the latter stages of the first half, however.  Ken Perkins (Cedar Rapids, Iowa/Kennedy) played a service into the box from long distance that Steve Shively (Indianapolis, Ind./North Central) flicked on with his head.  The ball ended up on the forehead of Miller, who sent a header of his own past charging Saint Francis netminder Darius Motazed from eight yards out for his first career marker.

The Crusaders had a golden opportunity for the equalizer just out of the halftime break, as in the 50th minute they were awarded a penalty kick after the Red Flash committed a foul in the box.  But Motazed came up big for Saint Francis, stopping the PK as well as a well-struck shot from the angle right by Roby Del Giudice (Toronto, Ont./Robert F. Hall [Wallace State C.C.]) three minutes later to keep the Red Flash ahead.  Valpo had one last opportunity in the 89th minute, getting the ball deep into Saint Francis territory, but a header from the middle of the box could not find its way on frame.

The Crusaders ended the game with a 17-12 advantage in the shots category over Saint Francis (3-4-0), putting seven shots on goal to the Red Flash’s four.  Ryan Schwarz (Rockford, Ill./Boylan Catholic) made two saves in goal for Valpo, while Motazed stopped six shots in the winning effort.

“In all, though, I still feel we played well enough and created enough chances that we could have taken more out of the result,” said Avery.  “For the last eighty minutes, I thought we were the better side, but in the first ten minutes the game was decided.  I am positive we'll learn some hard lessons from this setback and be a better team for it in the long run.  We end the pre-league schedule 3-3 and with a better idea of who we are heading into conference play.”

Valparaiso (3-3-0) kicks off Horizon League play this coming Friday, as the Crusaders travel to take on Detroit.  Kickoff on the 25th is slated for 3 p.m. CDT, with live stats available through www.valpoathletics.com.