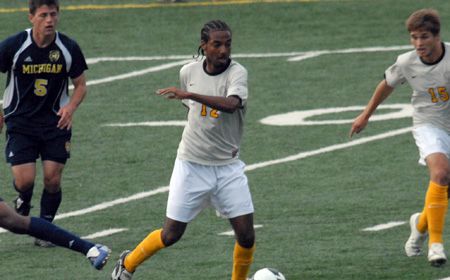 Roby Del Giudice found the back of the net for the game's only goal Friday. (Ray Acevedo)
Valparaiso at Detroit | September 25, 2009
Related Links
Related Links

Roby Del Giudice’s (Toronto, Ont./Robert F. Hall [Wallace State C.C.] first Division I goal proved to be a big one Friday afternoon, as the junior found the back of the net in the 34th minute for what turned out to be the only goal of Valparaiso’s 1-0 victory at Detroit Friday afternoon in both squads’ Horizon League opener.

“I’m happy that our guys were able to find a way to get three points on the road today,” said Crusader head coach Mike Avery.  “As we know, collecting points early on in league play is very important, especially now that only six teams make the tournament.  It’s also never easy to get points on the road in this league anywhere, so we really feel good about coming away from our first league game on the road with three points.”

The game’s only goal would come in the latter stages of the opening 45 minutes.  Zack Stivers (Brownsburg, Ind./Brownsburg) found Del Giudice about 30 yards out from the goal.  Del Giudice then took a strike that Avery called “a world-class goal, absolutely smashed into the left side netting” to put the Crusaders up 1-0 and eventually ended up serving as the match-winner.

Detroit (1-5-1, 0-1-0 Horizon) held a slight 12-11 advantage in shot attempts on Friday, but Valparaiso placed seven of its shots on frame to the Titans’ four.  Crusader netminder Ryan Schwarz (Rockford, Ill./Boylan Catholic) stopped all four of Detroit’s opportunities to earn his second shutout of the season and the eighth clean sheet of his career, putting him alone in third place in Valpo history in the category.

“We had a couple other good chances to add a second goal, but Ryan made a couple nice saves to keep the shutout going and make sure one would be all we needed,” said Avery.  “All in all, we leave with a good result and now turn our attention to a very good Loyola team coming in on Sunday.”

Valparaiso (4-3-0, 1-0-0 Horizon) continues league play this Sunday, September 27, as the Crusaders host defending league tournament champion Loyola at Brown Field.  Kickoff is slated for 4 p.m., and all the action can be heard live on WVUR, 95.1 FM, Valparaiso and online at www.valpoathletics.com, which will also have a link for live stats.