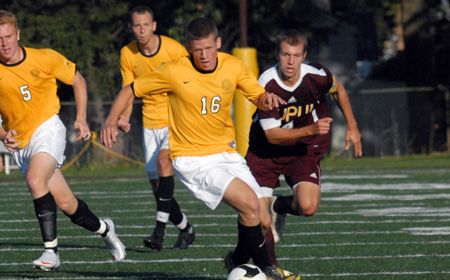 The Valparaiso men’s soccer squad battled #25 Michigan State Wednesday afternoon in East Lansing, Mich., but two goals within the first 12 minutes proved to be too much for the Crusaders to overcome, as the Spartans earned the 2-0 victory.

“Michigan State came out with a lot of energy and caught us early, putting us back on our heels,” said Crusader head coach Mike Avery.  “Once we figured it out and got things going, we played well, and were an extremely good side in the second half.  All in all, we just have to take the bad with the good today, but the good news is that as a non-league match, it doesn’t hurt us in the standings, and we came away from today’s game having learned lots of good lessons.”

Michigan State started out the match with a quick offensive burst, firing three shots in the first nine minutes.  The third shot put the Spartans on the board, as Spencer Thompson and Domenic Barone set up Rubin Bega from the middle to the left side of the box six yards out, and Bega finished for his fourth goal of the year to put Michigan State ahead 1-0 in the ninth minute.

It would take the Spartans just three minutes to add an insurance tally, as Thompson and Bega hooked up again for Michigan State’s second goal.  Thompson crossed a ball across the box from the right-hand side and found Bega, who put the ball into the short side of the net to give his side a two-goal advantage in the 12th minute.

That would mark the game’s final tally, although the Crusaders held a significant offensive advantage in the second 45 minutes, taking six second-half shots to just one by Michigan State.  Avery said regarding the second half, “We came up with a lot of clean looks, plenty of good chances.  We just have to do a better job of converting those chances into shots on target”

Michigan State (5-2-1) ended the game with just an 8-7 advantage in shot opportunities over the Crusaders, but put four shots on net to Valpo’s one.  Ryan Schwarz (Rockford, Ill./Boylan Catholic) made two saves for the Crusaders, while his MSU counterpart, Avery Steinlage, had to stop just one shot.

Valparaiso (4-4-1) continues its three-game roadtrip with a return to Horizon League play on Sunday, October 4 as the Crusaders travel to Dayton to face off against Wright State.  Kickoff is slated for 5 p.m. CDT, and live stats will be available for the contest through www.valpoathletics.com.