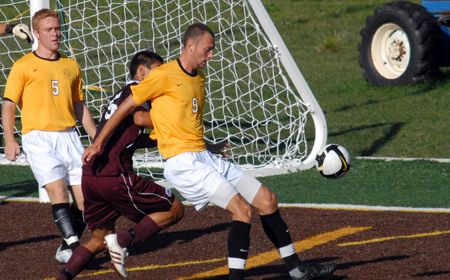 “This was a very good result for us today, especially coming off a disappointing loss on Sunday night,” said Crusader head coach Mike Avery.  “Our guys handled some adversity well in the early stages of the game today and, over time, took control and eventually put the game away in our favor.”

The two squads played to a scoreless first half, but it would not take the Crusaders long to change that, as in the 53rd minute, Valpo took advantage of a prime scoring chance.  Rodolfo Lucas (Mogi Mirim, Brazil/ [Coffeyville C.C.]) lined up a corner kick and sent it to the far post, where 6’6” Stefan Antonijevic (Buffalo Grove, Ill./Stevenson [College of Lake County/Marquette] got above the crowd and headed the ball into the back of the net for his second goal of the season.

Valpo got an opportunity to add a key insurance tally in the 79th minute when a Bowling Green defender was whistled for a foul inside the box, setting up a penalty kick for the Crusaders.  Zack Stivers (Brownsburg, Ind./Brownsburg) stepped up and calmly drilled the ball past BGSU netminder Jeff Smoker for his team-leading fifth goal of the season.

Valparaiso out-shot Bowling Green (1-8-2) by a 19-11 margin for the match and placed six shots on net to the Falcons’ five.  Ryan Schwarz (Rockford, Ill./Boylan Catholic) stopped all five shots BGSU placed on frame for his third shutout of the season, including two terrific saves late to preserve the clean sheet, while Smoker made four saves in net for the Falcons.

“We got to play a lot of guys today, which gave us a lift seeing some guys come off the bench with fresh legs and play as hard as they did,” said Avery.  “Now we start to prepare for Butler on Sunday as we enter the heart of league play.”

Valparaiso (5-5-1) returns home for a key Horizon League showdown with in-state rival Butler on Sunday afternoon.  Kickoff from Brown Field is slated for 12:30 p.m., and all the action can be heard live on WVUR, 95.1 FM, Valparaiso and online at www.valpoathletics.com, which will also have a link for live statistics.