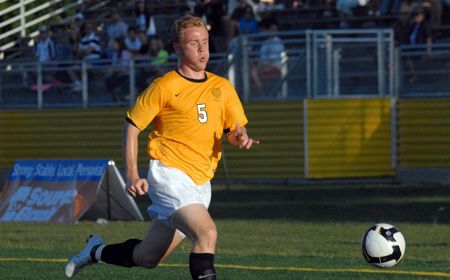 Redshirt sophomore Brendan Roth (Elkhart, Ind./Memorial) found the back of the net in the 98th minute of action at Brown Field on Saturday afternoon, giving the Valparaiso men’s soccer team a big 3-2 overtime victory in Horizon League play over league leader Green Bay.

“This was a very important win for us today, one that I thought we earned against a very good Green Bay team,” said Crusader head coach Mike Avery.  “You’ve got to give Green Bay a lot of credit for coming back to tie the game late, but I was very proud of our guys that they didn’t let the late goal in regulation crush them.  Once we got into overtime, for the first time, we were the team forcing the issue and it paid off with the winning goal.”

The golden goal came on a transition opportunity off of a Green Bay corner, as Rodolfo Lucas (Mogi Mirim, Brazil/ [Coffeyville C.C.]) gained possession and started streaking up the right-hand side before the Phoenix  Lucas found Roby Del Giudice (Toronto, Ont./Robert F. Hall [Wallace State C.C.]) in the center of the field just over the midfield line, who carried for about ten yards before sending it to Roth on the left side.  Roth brought the ball in to about 15 yards out before unleashing a shot that eluded Phoenix goalkeeper Ryan Wehking and found its way inside the far post to end the game. could get set back on defense.

The Crusaders took their first lead of the game in the 59th minute of play, as Del Giudice worked a give-and-go with Steve Shively (Indianapolis, Ind./North Central) in the center part of the pitch in the offensive third.  Shively’s pass back to Del Giudice was right on the mark, and the junior sent a strike from 15 yards that found the back of the net to give Valpo a 2-1 lead.  The Crusaders held the lead for over 30 minutes, until Green Bay’s David Znaty took advantage of a free kick opportunity straight out from 20 yards in the 89th minute to tie the match at two and send it to the extra session.

“I thought Roby was the man of the match today for us,” said Avery.  “Obviously, he was instrumental in two of our three goals, and he also made some other very nice plays for us up front today.”

Znaty opened the scoring for the Phoenix in the 14th minute, also on a free kick, as the senior found the lower left part of the net from the right side, about 24 yards out, to put Green Bay on top early 1-0.  Valpo would get the equalizier in the closing minutes of the first half, however, as Chadd Sult (South Bend, Ind./John Adams) set up Clayton Lyons (Louisville, Ky./Trinity) in the right corner for a cross into the box.  Lyons’ cross found its way to the head of freshman Sam Haines (McKinney, Texas/McKinney Boyd), who headed it home from ten yards out for his first career marker.

Green Bay (10-2-2, 4-2-0 Horizon) outshot the Crusaders 18-11 on the day, but Valpo held a 4-2 advantage in the category during the overtime session.  The Phoenix also put eight shots on frame to Valpo’s four.  Ryan Schwarz (Rockford, Ill./Boylan Catholic) made six saves in net for the Crusaders, while Wehking stopped one shot for Green Bay.  It was a physical battle as well, with 47 total fouls called, 24 on Valpo and 23 on Green Bay.

“We’ve really been focusing all week on two areas of our game,” concluded Avery.  “The first was how to better handle teams that are dangerous on set pieces into the box, and I thought we handled Green Bay’s corners and deep throw-ins pretty effectively.  The other was getting forward on the counter with dangerous opportunities, and obviously we were very good at that today.”

Valparaiso (6-6-1, 2-2-1 Horizon) sits in fourth place in the league standings with seven points after Saturday’s victory.  Valpo starts on a three-game road trip with a step out of league play on Tuesday, as the Crusaders travel to Fort Wayne to take on IPFW.  Kickoff is scheduled for 6 p.m. CDT, and live stats will be available through www.valpoathletics.com.