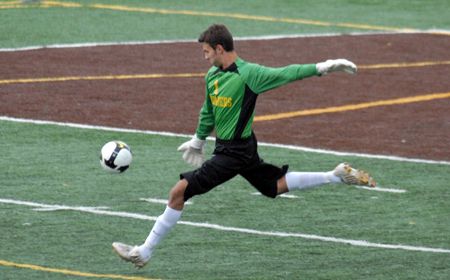 The Valparaiso men’s soccer team moved one step closer to securing a berth in the Horizon League Championship Saturday evening, defeating Milwaukee on the road 1-0, the program’s first-ever victory over the Panthers.

The win moves the Crusaders to 3-2-1 in league action, their 10 points just one point away from clinching a spot in the top-six in the Horizon League standings and the subsequent spot in the league tournament.  Valpo also now sits at 8-6-1 overall on the season, just one positive result away from securing the first .500 or better season for the program since 1987.

“This was obviously a big win for us tonight in the fight to make the tournament,” said Crusader head coach Mike Avery.  “I thought both teams played really well and it was a good game overall, and I’m proud of our guys for fighting and figuring out a way to come out on top.  Good teams figure out a win to get good wins on the road, and that is what we did tonight.”

Crusader netminder Ryan Schwarz (Rockford, Ill./Boylan Catholic) put forth an outstanding effort to earn his fifth shutout victory of the season, tied for second-most in a single season in Valpo history.  Schwarz made three first-half saves and then stopped a trio of shots in the first half-hour of the second stanza to keep the contest scoreless.

“Ryan was just absolutely amazing tonight in net for us,” said Avery.  “He stepped up and made a number of point-blank saves that kept us in the game before we were able to score.”

The lone goal of the game would find the back of the net late in the 76th minute.  With the Crusaders in the midst of an offensive attack, Clayton Lyons (Louisville, Ky./Trinity) sent a cross into the box from the right side that deflected off a Milwaukee defender marking a Valpo striker and inside the near post for an own goal to give the Crusaders a 1-0 lead.  Roby Del Giudice (Toronto, Ont./Robert F. Hall [Wallace State C.C.]) would send a one-touch shot off the cross bar in the 79th minute on a quality scoring opportunity, but the possible insurance tally would prove unnecessary as the Panthers failed to get a shot attempt in the game’s final stages.

Milwaukee (3-10-2, 2-3-2 Horizon) held a 13-10 advantage in the shots category, putting six shots on frame to five for Valpo.  Schwarz stopped all six shots he faced, lowering his goals against average on the season to 1.10, while Panther goalkeeper John Shakon made four saves.

Valparaiso (8-6-1, 3-2-1 Horizon) will look to secure its spot in the Horizon League Championship next Friday evening when the Crusaders head over to the Windy City to take on UIC.  Kickoff is set for 7 p.m., with live stats available through www.valpoathletics.com.