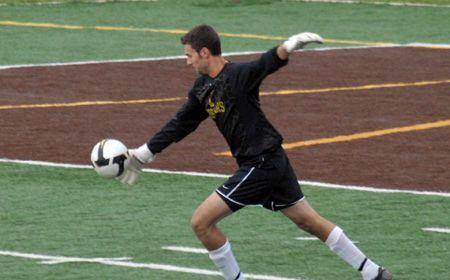 The game was delayed 24 hours, but the result was worth waiting for, as Valparaiso clinched a spot in the upcoming Horizon League Championship with a 0-0 (2ot) tie at UIC on Saturday evening.  Crusader goalkeeper Ryan Schwarz (Rockford, Ill./Boylan Catholic) extended his shutout streak to over 299 minutes in the scoreless duel and tied a Valpo single-season record for clean sheets.

The draw clinched the spot in the postseason, as this year’s tournament will feature just the league’s top six teams.  The one point awarded gave Valpo 11 points on the season, four points ahead of seventh-place WrightState, which has just one match remaining.  Valpo is still in the hunt for a possible second-seed, which would give the Crusaders a bye into the semifinals, while a third or fourth seed would bring a first-round quarterfinal matchup to Brown Field.

“I just want to congratulate all of our guys on qualifying for the postseason tournament,” said Crusader head coach Mike Avery.  “In this league, with the level and depth of teams competing, it’s a great accomplishment to finish in the top six.  You can’t win the whole thing if you’re not playing in it, so all of our ultimate goals are still alive for us.”

The tie also assures the Crusaders of finishing at or above .500 on the season, a feat not accomplished by a Valpo side since the 1987 squad went 9-6-1.  The Crusaders also sit just one victory shy of matching that year’s team for the program record for wins in a single season.

Saturday’s contest was a very even affair, as UIC (6-4-6, 3-1-2 Horizon) attempted just seven shots on the night while Valpo recorded six shot attempts, both teams placing four of their tries on frame.  Schwarz and UIC netminder Jovan Bubonja, the league’s last two Goalkeepers of the Year, were both up to the challenge, as both stopped all four shots on goal to secure the scoreless draw.  For Schwarz, it was his third consecutive clean sheet and sixth of the 2009 campaign, matching Kevin Hughes of the aforementioned 1987 squad for most in a single year in school history.  It also is his 12th career shutout, tied for second on Valpo’s all-time chart.

“Tonight’s result was earned against a very good UIC team that we played well against,” said Avery.  “It was a really evenly played game, and both teams had some good chances, including a shot off the goal frame on each side.  It was an exciting contest, and in the end a draw is a pretty good result.  Schwarz was terrific again tonight for us, while Rodolfo Lucas (Mogi Mirim, Brazil/ [Coffeyville C.C.]) and Wei Ming Wong (Hong Kong/Hong Kong International [SMU]) were both fantastic in the central part of our defense tonight.”

Valparaiso (8-6-2, 3-2-2 Horizon) closes out the regular season on Senior Day at Brown Field on Saturday, November 7 as the Crusaders challenge Cleveland State at 1 p.m. CST.  If you can’t make it to the game, all the action can be heard live on WVUR, 95.1 FM, Valparaiso and online at www.valpoathletics.com, which will also have a link for live stats.