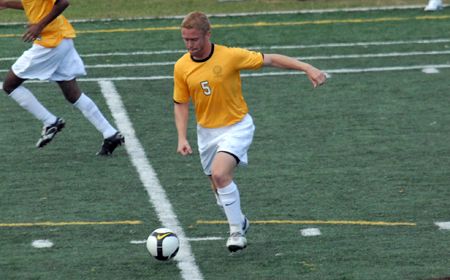 The win was the Crusaders’ tenth of the 2009 campaign, breaking the 1987 squad’s single-season record of nine victories.  Horizon League Goalkeeper of the Year Ryan Schwarz (Rockford, Ill./Boylan Catholic) made six saves in net to earn his seventh shutout of the season, leaving him alone atop Valpo’s single-season chart for clean sheets by a netminder.

“Scoring the early goal really helped take a little bit of the pressure off for us today,” said Crusader head coach Mike Avery.  “Then when we were able to get the second goal pretty early in the second half, it really sealed the game for us.  In the latter portion of the game, Milwaukee pushed forward looking to score, and we were able to get behind them a couple times to ice the game.  In the end, the name of the game in the playoffs is survive and advance.  We’re still alive and looking forward to playing Green Bay on Friday.”

The match-winner from Roth came on a nice set piece off a free kick by the Crusaders.  Danny Jeftich (Valparaiso, Ind./Valparaiso [IUPUI]) initiated the piece from about 30 yards out on the left flank and sent it into the center of the box to Roby Del Giudice (Toronto, Ont./Robert F. Hall [Wallace State C.C.]).  Del Giudice touched the ball back to Roth, who took a well-placed strike from 15 yards that eluded Panther goalkeeper John Shakon for the game’s opening goal.

Zack Stivers (Brownsburg, Ind./Brownsburg) gave Valpo a critical insurance tally early on in the second half to help secure the game for the Crusaders.  A foul was called on Milwaukee inside the box, leading to a penalty kick opportunity.  Stivers took the initial spot kick, which was saved by Shakon, but the rebound came directly back to the junior, who punched it into the back of the net for his team-leading sixth goal of the season in the 53rd minute.

Roth added his second goal of the contest in the 78th minute, as Ken Perkins (Cedar Rapids, Iowa/Kennedy) sent a long pass up the right side, where Roth outraced both Shakon and a Panther defender to the ball and chipped it over Shakon’s head into the goal from 20 yards out.  Valpo closed out the scoring in the 88th minute when Clayton Lyons (Louisville, Ky./Trinity) sent a long lead pass to Kelvin Zelee (South Bend, Ind./John Adams [Indiana]), who found himself one-on-one with Shakon on a breakaway and converted for his first collegiate goal.

Valparaiso placed seven shots on net on the day to six for Milwaukee (3-13-2).  Schwarz made the aforementioned six stops in net, while Shakon made two saves and the Panther defense came up with another save.

“A lot of credit goes to Brendan for two very well-taken goals today,” said Avery.  “His first one was just a really good strike from the top of the box, while he earned his second one out of determination.  He just out-ran the goalie and defender to the ball and was able to slot it in.  I also thought Ryan played well in goal today.  He handled a lot of cross balls cleanly, and while he wasn’t called on to make a lot of tough saves, he handled everything that came his way and managed the game well.”

Valparaiso (10-6-2), which was hosting its first postseason game since 1998, earned a victory in the postseason for the first time since 1996.  The Crusaders advance to Indianapolis on Friday, where they will face second-seeded Green Bay at 11 a.m. CST.  Links for live video through the Horizon League Network, as well as live statistics, will be available at www.valpoathletics.com.