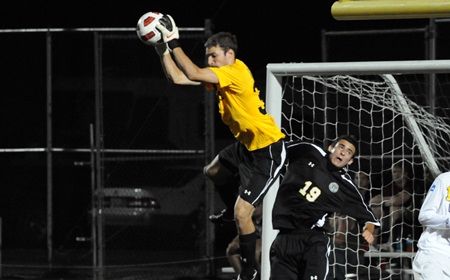 “Tonight was a useful game for us in a lot of ways,” said Crusader head coach Mike Avery.  “We were able to get some different guys some minutes on the pitch, and were also able to get guys some rest that needed it.  I feel like we were better today than we played on Sunday, which is a good direction to be heading as we go into Saturday’s game.”

The Leathernecks hit the scoreboard first on Wednesday evening, taking advantage of the first scoring opportunity for either side in the seventh minute.  Darryl Odom crossed a ball from the right into the box, where Jonathan Sandoval touched it over to Mariano Leo, who found himself one-on-one with Crusader goalkeeper Kyle Zobeck (Coralville, Iowa/Iowa City West).  Leo struck a low shot that found its way past Zobeck into the back of the net to give WIU the 1-0 lead.

Valpo took advantage of a Leatherneck miscue to knot the match up in the 15th minute.  A Crusader cross into the box was handled by a WIU defender, leading the referee to award Valpo a penalty kick.  Senior Zack Stivers (Brownsburg, Ind./Brownsburg) stepped up to take the spot kick and calmly drilled it into the right-hand side of the net, making him a perfect 3-for-3 on penalty opportunities this season.

While that would be the game’s final goal, it wasn’t for a lack of scoring opportunities, as both sides had a number of chances to put a second tally on the board.  In the first half alone, Stefan Antonijevic (Buffalo Grove, Ill./Stevenson [College of Lake County/Marquette]) had a header hit the crossbar in the 20th minute, while a Crusader defender had to clear a ball off the back line to prevent WIU’s Sandoval from tallying a go-ahead marker in the 29th minute.  Then after the Leathernecks were awarded a PK of their own when the Crusaders were called for a foul in the box in the 44th minute, Zobeck stepped up and made a diving save towards the post on the spot kick attempt by Cosimo Patano to keep the match tied at one.

The second half saw Valpo outshoot Western Illinois (2-5-4) by an identical 6-4 margin as in the first half, but WIU netminder Andy Ryan made two saves and Zobeck stopped one shot to send the game into extra time.  Neither side got a shot attempt off in the first overtime period, but the Crusaders had a pair of stellar opportunities for the golden goal in the second overtime.  In the 102nd minute, Chadd Sult (South Bend, Ind./John Adams) had a shot turned away by a diving Ryan and then Brendan Roth (Elkhart, Ind./Memorial) had an attempt in the box off the ensuing corner go just right of the frame.  Then, with under a minute to play, Guy Shabtay (Ramat-Gan, Israel/Blich [Prairie State C.C.]) struck a shot from 20 yards out that ricocheted off the goalpost.

“Both teams had good chances to take the lead, Western Illinois with a penalty kick and us hitting the post and the crossbar, so maybe it was a fair result,” said Avery.  “I thought we did a good job in creating more chances and held more possession throughout the game.  There were a lot of whistles tonight, which made it hard for either team to get into a rhythm.”

Valpo held a 16-9 advantage over Western Illinois for the game in the shots category, while both sides got five attempts on goal.  Ryan made four saves in net for WIU, while Zobeck made three stops and the Crusaders were also credited with a team save.  The physical battle saw 28 fouls called against Valpo to 19 for the Leathernecks.

“I thought Zobeck played very well for goal in us tonight,” said Avery.  “All in all, we got out of the game with a good result and now look forward to a key league match on Saturday.”

Valparaiso (6-3-2) gets right back on the road Saturday for the first match of a three-game road trip, traveling to eastern Ohio to take on Cleveland State in Horizon League action.  Links for live stats and live video for that contest will be available at www.valpoathletics.com.