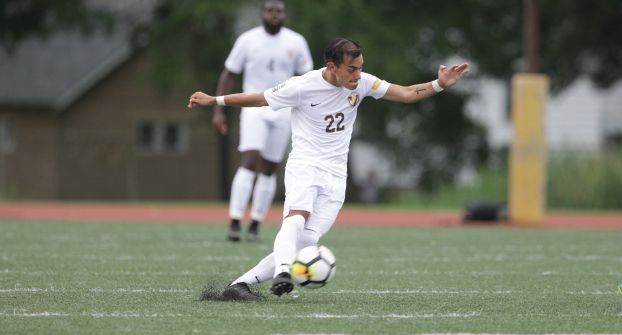 Danny Moreno scored his first goal as a Crusader on a warm Sunday afternoon at Marquette.
Valparaiso at Marquette | August 26, 2018

The Valparaiso University men’s soccer team incurred its first setback of the season on Sunday afternoon in Milwaukee as the Crusaders fell 3-1 to Marquette. Danny Moreno (Pasto, Columbia / Desert Mountain [Grand Canyon]) became the second Crusader in as many matches to score his first goal in a Valpo uniform by providing his team’s tally.

“We knew coming in that this was a challenging game for many reasons. First and foremost, Marquette is a very good team with talented players and Coach Bennett and his staff do a good job. Playing on the road against teams like this in their season opening game is tough. It was also a very hot and humid day. We played overtime less than 48 hours ago and they didn’t have a Friday game, so it was as much a test of fitness and mental toughness as it was a soccer game for us.”

“While we didn’t get the result we wanted, there were a lot of real positive things for us to take away from the game. We showed a lot of fight and resolve and as we started to figure out the game we really pushed them for a long stretch. We had several chances to tie it up at 2-2, including a chance that was cleared off the line, and it really felt inevitable that we’d score. The third goal broke that spell, obviously, and while we might have had an argument for an offside call, the bottom line is that our players can’t stop and rely on a call to be made. It’s a mental mistake that was costly.”

“The early part of the season is about growing up and growing together and you need tough games and tough conditions to really test you, so if it’s possible that a loss can be a good thing, I think this one will help us.”

The Crusaders (1-1) will continue a stretch of four straight games in the state of Wisconsin as they participate in the University of Wisconsin Tournament next weekend. First up is a neutral site affair with Northwestern on Saturday at 5 p.m. in Madison.