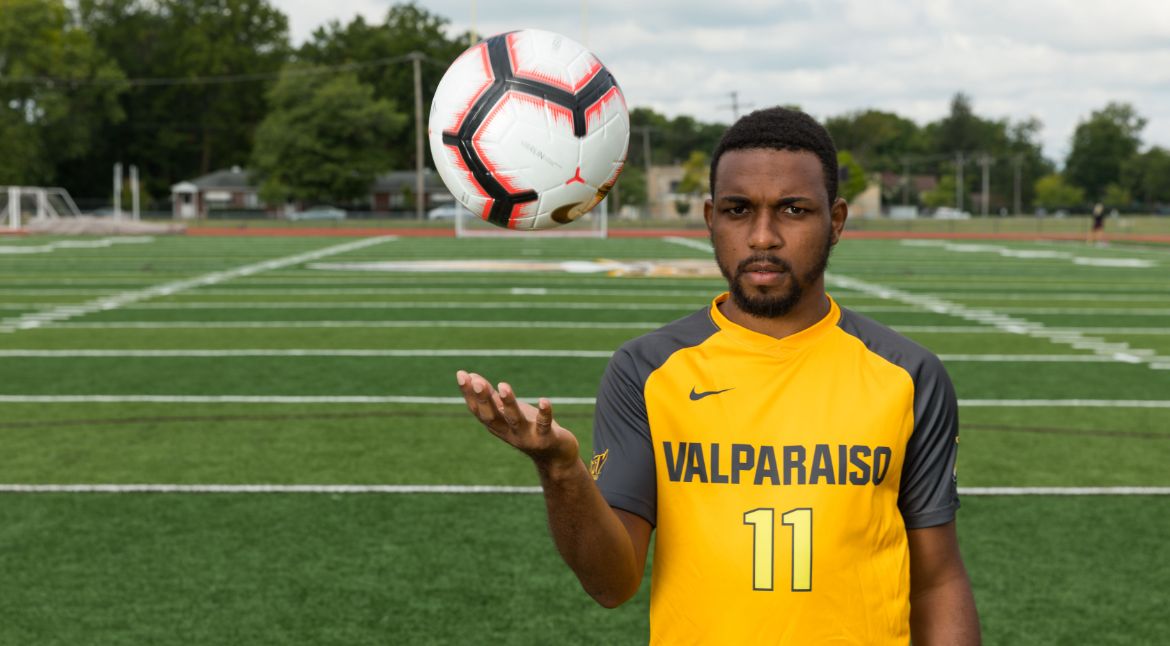 This Week in Valpo Soccer: The Valparaiso University men’s soccer team will begin a challenging stretch of four consecutive matches away from Brown Field on Friday night in Chicago. Valpo will battle former conference foe UIC in the lone game of a 10-day span that leads into an active stretch of three road games in six days in three states.

Previously: Valpo matched a program record with eight goals in an 8-2 triumph over IU Northwest in Monday’s home opener. It marked the program’s first regular season match on new Brown Field turf that was installed over the summer. The Valpo side saw 11 different players register at least one point and seven of the eight goals were scored by players who entered the evening seeking their first goal in a Valpo kit. The home win came after a 1-1 draw at Green Bay on Friday, Aug. 30, a season opener that saw Valpo lead after a 43rd minute Mason Marcey goal until the Phoenix equalized in the 89th minute.

Making It Rain: Cole Rainwater had seven points in Monday’s 8-2 victory over IU Northwest, becoming the first player in Mike Avery’s 13-year coaching tenure to turn in seven points in a match for Valpo. The last player to do so was Paul Leitelt on Aug. 27, 2006 vs. Evansville. Rainwater was the fifth player in program history with a seven-point performance and the 10th to turn a hat trick. Valpo’s last seven hat tricks have all been scored by players in their first or second year in the program. His hat trick was Valpo’s third in the last four years (Kendan Anderson and Adan Garcia) after the team had gone a decade between hat tricks prior to Anderson's in 2016. For his efforts, Rainwater was named the Missouri Valley Conference Player of the Week on Tuesday.

Strong Beginnings: Valpo debuted its new Brown Field turf by equaling a program record for goals in a game on Monday night, downing IU Northwest 8-2 in the home opener. Valpo matched the team watermark of eight goals that was established on Aug. 26, 2011 against Calumet and had stood alone ever since. Monday was the sixth time in program history Valpo prevailed by six goals or more and the first time the team had a margin of victory that large since the aforementioned 2011 game against Calumet.

Immediate Overtime: In Friday’s 1-1 draw at Green Bay, Valpo went to overtime in the season opener for the fourth year in a row and the seventh time in the last eight years. It marked the fourth time in that span and the first since 2014 that the team started the season with a draw.

Series Notes: Valpo and UIC will face off for the first time since the two teams shared Horizon League affiliation from 2007-2016. Valpo dropped the most recent meeting on Oct. 22, 2016 in Chicago 1-0. The Flames have won five straight in the head-to-head series with all five coming by one goal and four of the five by the score of 1-0. Valpo’s most recent win over UIC was on Oct. 29, 2011, 1-0 in overtime in Northwest Indiana. Valpo will look for its first win at UIC as the team enters the match with an 0-11-2 record when visiting the Flames in a series that dates back to 1984. Overall, Valpo is 3-21-2 against its nearby foe.

Scouting the Flames: UIC split a pair of fixtures at the Wolstein Classic in Columbus, Ohio over Labor Day weekend. The Flames topped Dayton 3-2 in overtime before falling 1-0 to Big Ten foe Ohio State. Josiah Ash, Alwin Seitz and Roberto Alonzo have scored goals for head coach Sean Phillips’ team this season. The Flames are three-time defending Horizon League champions and were picked to finish second in the league’s preseason poll while hauling in five of the nine first-place votes. UIC went 12-6-2 and 5-2-1 in conference play a year ago en route to an NCAA Tournament appearance. The Flames were a perfect 7-0-0 at home last season and have won 13 straight Flames Field fixtures dating back to Sept. 16, 2017 vs. Wright State.