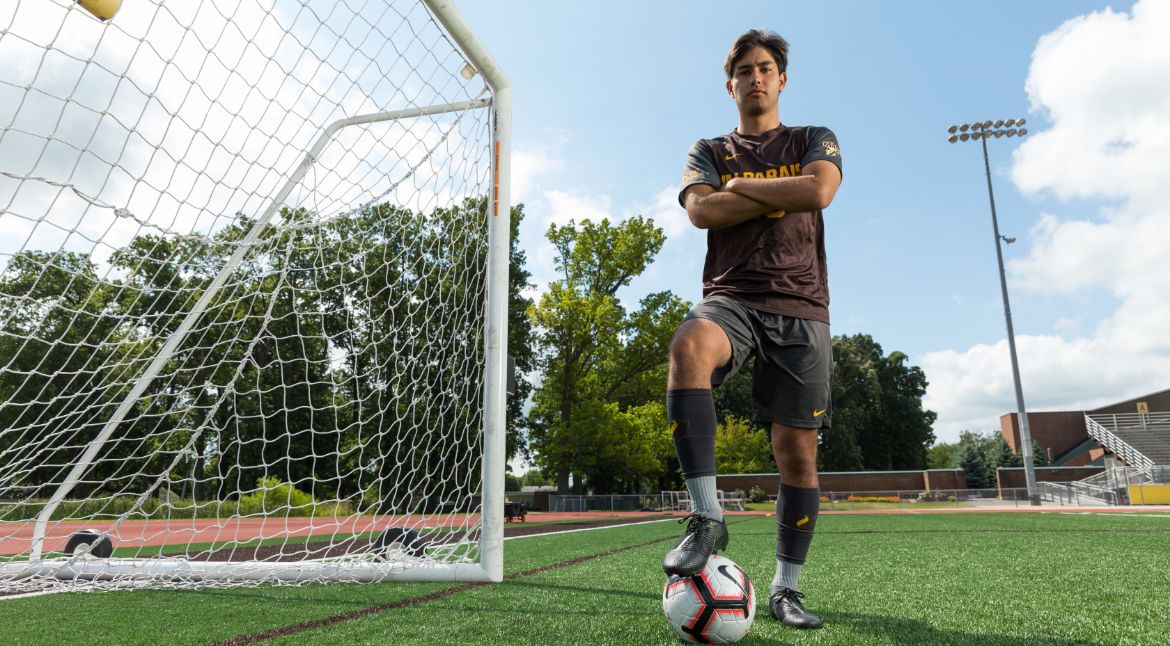 This Week in Valpo Soccer: Missouri Valley Conference play is upon us as the Valparaiso University men’s soccer team will kick off league action on Wednesday afternoon in Springfield, Mo. against preseason MVC favorite Missouri State. Evansville will provide the opposition for the first Valley home fixture of 2019, a Sunday matinee at Brown Field. The conference is using a new double-round robin format, so Wednesday will kick off a 10-game slate that sees Valpo play each of the other five teams at home and on the road.

Previously: Valpo dropped a pair of road matches this past weekend, falling 6-0 to nationally-ranked SMU on Friday night in Dallas before incurring a 2-1 setback in double overtime on Sunday evening at Oral Roberts. Edvin Holst recorded eight saves and Ryan Madondo scored his first goal in a Valpo kit on Sunday. Neither team scored for the first 84 minutes, but then both sides scored in the final six of regulation to send the showdown to overtime. The Golden Eagles prevailed thanks to a golden goal at the 106-minute mark.

Following Valpo: Wednesday’s game will be broadcast on ESPN3, while Sunday’s MVC home opener will be carried on ESPN+. Dave Huseman (play-by-play) and Ben Ariano (color commentary) will describe the action on Sunday. Links to live video and stats are available on ValpoAthletics.com.

Good in Goal: Just three appearances into his collegiate career, freshman goalkeeper Edvin Holst has already enjoyed a pair of eight-save efforts. The last time a Valpo goalkeeper had more than eight saves in a match was Sept. 9, 2014, when Nico Campbell stopped nine shots on goal vs. Butler. Holst leads the Missouri Valley Conference with 18 saves in just three games while everyone else in the Top 5 in the league has played in five games and no one else has more than 13 saves.

Lucky Seven: When Ryan Madondo found the back of the net on Sept. 15 in Tulsa, he became the seventh Valpo player with a goal this season. The team featured 11 goal scorers last season, and Mason Marcey is the only player who has scored both last season and already this season. Just five games into 2019, Valpo has already had 17 different players score goals over the 2018 and 2019 seasons.

Series Notes – Missouri State: Valpo heads into Wednesday hoping to secure its first ever victory over Missouri State as the team stands at 0-8-1 in a head-to-head series that started in 1989. The lone draw came 1-1 on Sept. 19, 2008 in Springfield. Valpo is 0-3 against the Bears since joining the Missouri Valley Conference prior to the 2017 campaign. This is the second straight season Valpo will open conference action in Springfield after the Bears won 1-0 behind an 18th-minute goal by Josh Dolling on Sept. 22 of last season.

Series Notes – Evansville: Valpo stands at 2-3-2 all-time against the Purple Aces in a series that started in 2002. The Brown & Gold earned a 1-1 draw on Oct. 27 of last season to clinch a spot in the league tournament. Valpo is 1-0-1 against the Purple Aces since joining The Valley after picking up a 2-1 win in the latest Brown Field meeting, which occurred on Oct. 7, 2017. Valpo is 2-0-1 all-time when hosting Evansville.

Scouting the Opponent – Missouri State: Valpo will be thrown right into the fire, opening Valley play against the team picked to win the conference this season. The Bears are off to an unbeaten start to the year with wins over Santa Clara, Kansas City, Central Arkansas and Tulsa. Josh Dolling, Kyle Hiebert and Ben Stroud all earned preseason all-conference honors. Dolling led the conference with 10 goals and 23 points in 2018 on his way to all-MVC First Team and United Soccer Coaches All-West Region second team recognition.

Scouting the Opponent – Evansville: The Purple Aces were picked to finish fifth in the Valley, one point ahead of Valpo in the preseason survey. They enter the week coming off a 1-0 victory over UNC Asheville on Saturday, Sept. 14 and host Loyola on Wednesday before the visit to Valpo. Evansville’s Preseason All-MVC Selection was senior Jesse Stafford-Lacey, who scored three goals last year on his way to second-team all-conference honors. Stafford-Lacey enters the week with three goals in his first four games this season. Evansville is under the direction of Marshall Ray, who is in his fifth season as head coach after joining the staff as the top assistant in 2006. He played at Evansville starting in 1995.

Strong Starts: Valpo had two players with three goals and seven points over the first three games of the season in Mason Marcey and Cole Rainwater. Before this year, Isaiah Madrid in 2016 was the only Valpo player since 2006 to reach three goals or seven points in the season's first three fixtures. This was the first time since at least 1987 that two Valpo players have had three goals or more just three matches into a season.