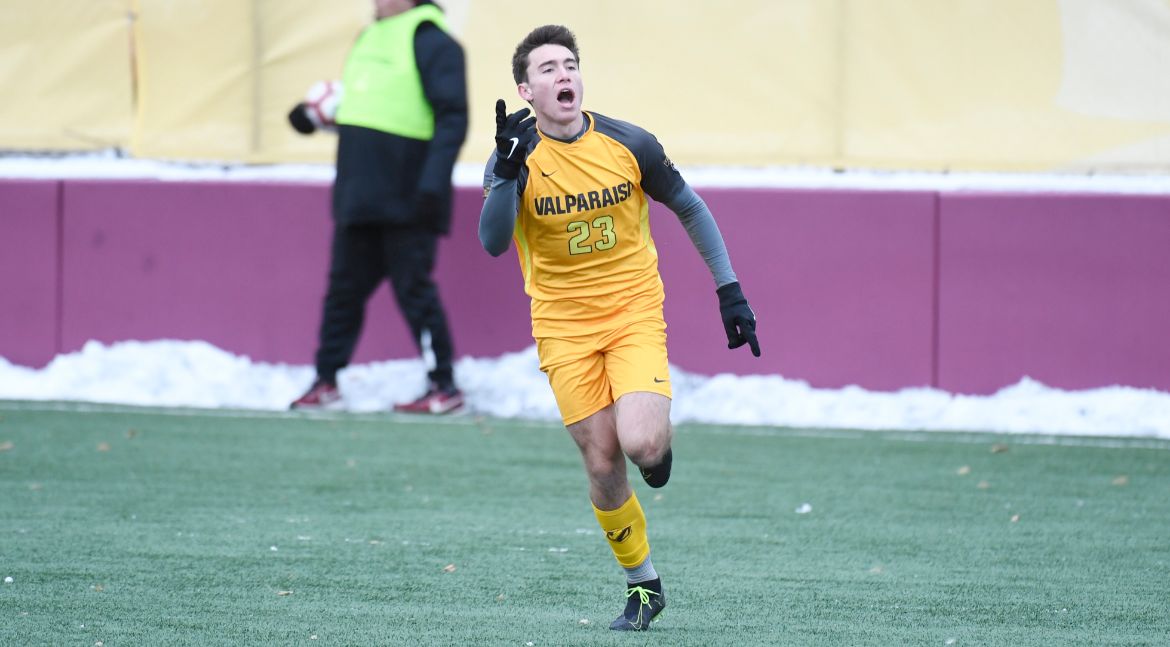 Mason Marcey scored his fifth goal of the season on Wednesday.
Valparaiso at Drake | November 13, 2019

The Valparaiso University men’s soccer team led for much of the match, but saw a quality effort come up shy in a season-closing 2-1 overtime defeat to Drake on a frigid Wednesday afternoon at Loyola Soccer Park. The Bulldogs tied the match in the 87th minute on a shot that came from nearly the midfield stripe, then won it on a golden goal in the second overtime. Valpo’s goal was a beauty from Mason Marcey (Charlotte, N.C. / Charlotte Christian [Radford]) in the first half.

“This was a hard end to what has been a challenging season, and an ending that somehow doesn’t feel deserved because I thought we played very well today. You’ve got to give credit to Drake though; it looked like the game was pretty well settled in regulation, yet they kept putting balls in dangerous areas and finally broke through. I do think that last gap goal broke our collective heart a bit and we never quite recovered.”

“I knew that this would be an uphill climb this year. We lost 15 players off last year’s team and five of those guys played professionally this season. We played a young and inexperienced group all year long, and while the process can be trying at times, the lessons learned on the way have been invaluable. Already you can see how far the team has come from August until now. We played probably our best game all year today, and had some incredible performances from guys set to return next year.”

“We also had a handful of seniors play their final game today and they were incredible. Demar Rose, Adan Garcia, Dylan Waugaman and Chris Villalobos led the team today with class and distinction - exactly the way they have their entire Valpo careers.”

“The bad news is this season ends now, but the good news is that the future of the team is very, very bright.”