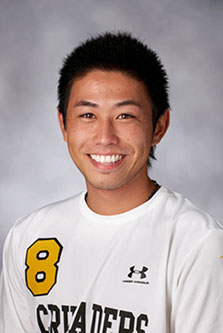 2007: Started 12 times among his 16 appearances as a junior for Valpo, including starting nods in each of the season’s last six matches ... had highest scoring out put by a Crusader in a single match on the year, putting up three points in 3-0 win over IPFW Sept. 7 ... assisted on Valpo’s second goal before adding tally of his own late in first half ... also fired shots on goal at DePaul and at Western Illinois.

2006: Participated in 13 matches off of the bench for the Crusaders as a sophomore ... appeared in each of first six matches of the season ... fired three shots Oct. 21 at UMKC, including one on frame ... named to the Mid-Continent Conference All-Academic Team.

2005: Appeared in five matches as a freshman, making two starts ... named to Academic All-Conference Team ... first career start came Oct. 1 against Centenary, a Crusader victory ... started again on Oct. 8 at Oakland, and again helped Valpo to a win ... scored first collegiate goal Oct. 23 at Cleveland State, finding the back of the net on only shot of the season ... also appeared in home matches against Detroit and Western Illinois.

Prep: A three-year letterwinner for the Crusaders ... named Korean-American Interscholastic Activities Conference (KAIAC) Most Valuable Player as a senior ... named to All-Conference team three straight seasons ... also earned All-Tournament honors all three years ... led team to KAIAC Regular Season and Tournament Championships in 2003, 2004 and 2005 ... placed on All-Asia Pacific Athletic Conference team as a senior ... named team’s Most Valuable Player in 2005 ... served as a co-captain during junior and senior seasons ... helped Crusaders compile a 63-2-3 record during his three years ... earned All-Conference honors as a senior in cross country, when he served as team captain.

Personal: Yuuki is the son of Darío Guzmán and Naomi Anno ... father Darío’s family is originally from Valparaiso, Chile ... Yuuki has lived in Chile, Japan and Korea ... majors are international service and Spanish ... born May 13, 1986.