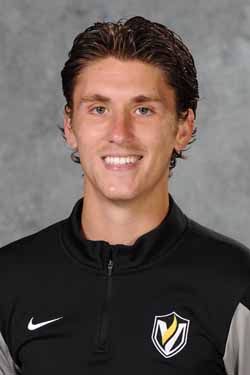 2013: Started all 18 matches for Valpo on defense as a junior ... played a total of 1,663 minutes on the back line, going the distance in 13 contests ... played 160 minutes more than any other Crusader on the season ... part of a defensive unit which surrendered just 22 goals in 18 matches, including five shutouts ... named a First Team All-League selection by College Sports Madness ... tabbed as Horizon League Defensive Player of the Week Nov. 11 after anchoring a back line which surrendered just one goal and four shots to #20 Michigan, followed by a clean sheet in the league finale against Oakland.

2012: Appeared in 18 games for the Crusaders including 16 starts on defense...logged 1,491 minutes for the Brown and Gold...started in all five shutouts on the season...recorded a shot on goal at IUPUI (Sept. 19).

Waubonsee C.C.: Played one season for the Chiefs ... member of Chicago Fire Super 20's side which won the national title in 2012 ... also spent time playing for the Fire PDL team ... helped Fire U-19s to national championship match in 2011.

Prep: A four-year letterwinner for the Bulldogs ... a three-time All-Conference and All-Area honoree ... member of Chicago Magic Academy team which placed third at the national finals in 2009 and fifth in 2008.