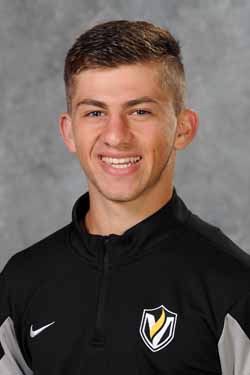 2013: Appeared in all 18 matches in the midfield for Valpo as a junior, starting 17 times ... played 1,380 minutes and went the distance six times ... registered a pair of assists, including on the eventual match-winner in win at Western Illinois Sept. 22, the only Crusader to record a multi-assist game on the season ... also tallied an assist Oct. 16 at Kentucky ... recorded seven shot attempts on the season, three of which were on goal ... earned chance to train with Seattle Sounders U23 during the summer of 2014 after advancing through an open tryout ... worked his way into the gameday squad and eventually made a number of appearances, including a pair of starting assignments ... member of the Horizon League Academic Honor Roll.

2012: Played in 20 games including 19 starts in the midfield for the Crusaders...logged the third-most minutes (1,730) of any player...recorded a shot on goal versus Western Illinois (Sept. 2), at DePaul (Oct. 9), and against Cleveland State (Oct. 13) ... recipient of the VUSMO TS11 Award ... played on the Des Moines Menace PDL team in the summer of 2013 ... captained the side to victory against Twin Cities ... receieved the Des Moines Menance community award during his time with the squad.

2011: Saw action in nine matches in the midfield for Valpo as a rookie, including five straight starts Oct. 16-29 before suffering season-ending injury ... named to the Horizon League All-Newcomer Team ... Crusaders posted shutouts in all five of his starts and seven of his nine appearances overall ... recorded a shot Oct. 22 against Milwaukee ... spent summer of 2012 playing with Fulham FC youth team ... also trained with the youth coach of Tottenham FC.

Prep: Team captain for the Chargers ... led his team in goal and assists ... named Team MVP and Most Inspirational Player ... has been invited to train with the youth program at Fulham FC in England each of the last four years ... played club soccer for the Cosmos West U18 Academy, which was ranked among the top-20 in the nation last year ... youngest player ever (14) to play in the Coast Soccer League, playing for DMS11 U19 squad which won the national championship.