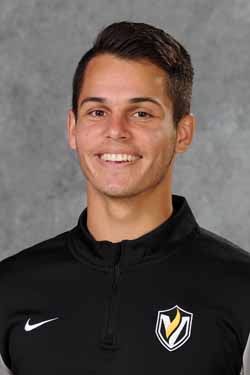 2013: Appeared in all 18 contests for Valpo as a junior, starting 16 times ... ranked third on the team with 1,436 minutes played for the season ... tied for team-high honors with four goals and ranked second on team with nine points ... opened his account for the season with the match-winner in the 78th minute at #24 Michigan State Sept. 8 ... made it back-to-back matches with the match-winning goal, scoring a golden goal in the second overtime period Sept. 13 at IUPUI ... found the back of the net against Sept. 22 at Western Illinois and also added an assist in that win as well ... scored in first round action of the HL Championship Nov. 12 at Oakland ... recorded 28 shot attempts on the year, 11 of which were on goal ... member of Horizon League Academic Honor Roll.

2012: Appeared in 16 matches including 14 starts for Valpo...scored two goals on just three shots on goal...recorded his first career point with an assist versus Northern Illinois (Oct. 17)...found the back of the net in back-to-back Horizon League tilts (Detroit on Oct. 21st, Wright State on Oct. 24th) the former being a match-winner...logged 1,386 minutes played.

2011: Played in four matches during his first season with the Crusaders ... tallied a pair of shot attempts Oct. 9 against Oral Roberts while also playing a season-high 54 minutes.

Prep: A two-year letterwinner for the Mustangs ... named Team MVP as a senior after leading squad in goals and points ... named to Chicago Sun-Time All-Area Second Team, Daily Herald DuPage Area Team and Downers Grove Reporter All-Athletic Team for 2010 ... also earned All-Sectional honors as a senior and was named school's Gatorade Player of the Year ... an All-Conference selection and Rookie of the Year in 2009 ... a six-year starter for the Chicago Magic, has been a member of the U15/U16 Academy and U18 Academy squads.