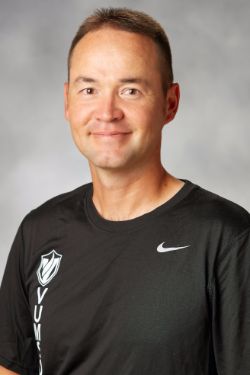 David Stroud finished his fourth season as an assistant coach with the Valparaiso men's soccer program in 2017, working directly with the goalkeepers.

Under Stroud's direction, Nico Campbell enjoyed an illustrious Crusader career, eventually leading to a professional contract with the Tampa Bay Rowdies of the USL right after his college playing days. As a senior in 2016, Campbell was named to the Horizon League all-second team. He posted an 0.93 goals against average while racking up 57 saves and notching seven clean sheets. Campbell finished his Crusader career with 22 shutouts, one why of matching Kyle Zobeck's program record.

Stroud mentored Campbell throughout the 2015 campaign as he became the fifth Goalkeeper of the Year honoree for Valpo since the program joined the Horizon League. Campbell surrendered just 15 goals in the Crusaders' 18 matches, posting a season GAA of 0.76 and eight shutouts to lead the Horizon League in both categories.

In his first season in 2014, Stroud mentored goalkeepers Campbell and Tom Serratore as the Crusaders enjoyed one of the top defensive seasons in program history en route to eight wins and six draws. Valpo surrendered just 17 goals in 19 matches, tied for the fourth-fewest goals surrendered in a single season in Crusader history. Campbell's season GAA of 0.81 matched the third-lowest single-season mark all-time at Valpo, while his six clean sheets are tied for fourth-most in a single season.

Stroud came to Valpo after spending three years at the helm of the St. Joseph’s (Ind.) men’s soccer program. After spending two seasons as an assistant coach at St. Joseph’s, Stroud was elevated to interim head coach prior to the 2011 campaign. Following the season, the interim title was removed, as Stroud served as head coach in 2012 and 2013 for the Pumas. Prior to his arrival at SJC, he spent one season as an assistant coach, working with the goalkeepers at Franklin Pierce College, where he helped lead the Ravens to the NCAA Division II Tournament.

Before joining the staff at Franklin Pierce, Stroud completed a variety of professional assignments in his native Japan. He worked with Okayama Yunogo Belle in the Japanese women's professional league as a goalkeeper trainer, where he worked with multiple national-level athletes, including the 2007 Asian Football Conference player-of-the-year nominee from Japan. Stroud also previously served as an assistant men's and women's soccer coach at Missouri Southern State University, and completed a graduate assistantship at Lake Erie College.