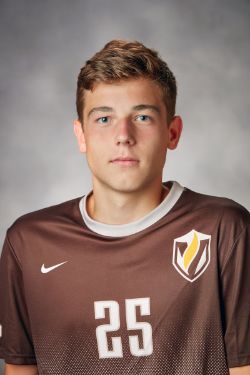 2016: Was the only Crusader named to the Horizon League all-freshman team... Played in all 19 matches, one of four Crusaders to do so, while making 15 starts... The only Crusader returning in 2017 who played in every match a year ago... Had one goal and one assist in his rookie campaign, while taking eight shots, three on goal... Started and played 89 minutes in his first collegiate game on Aug. 27 at Loyola... registered his first career point and assist on Sept. 4 against Western Illinois, helping on an Isaiah Madrid goal in the 58th minute of a 3-1 Valpo victory... Picked up the first goal of his collegiate career on Oct. 18 at Fort Wayne on an assist from fellow freshman Adan Garcia in the 67th minute of a 2-0 Valpo victory.

Prep: Attended Onze-Lieve-Vrouwlyceum Genk ... most recently played for Lommel United, spending time with the U19 and reserve teams ... previously played for KRC Genk, helping lead team to the Belgian championship at U13 and U14 levels ... also competed in gymnastics.