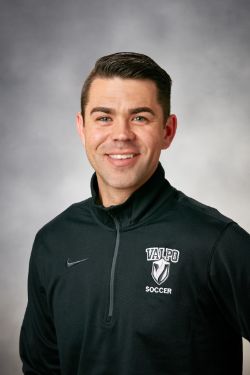 Kelly Altman joined the Valparaiso men's soccer coaching staff prior to the 2013 season as an assistant coach and enters his fourth season on staff in 2016.

Over Altman's first three seasons, the Crusaders have earned 20 victories, including a pair of wins over ranked Michigan State sides. Valpo has had strong defensive teams in each of Altman's three years, all ranking among the top-eight in program history for fewest goals surrendered in a season. Altman has helped coach nine All-League honorees in his three years, including four NSCAA All-Region recipients.

Altman arrived at Valpo after serving as an assistant coach at High Point in 2012, helping the Panthers to 12 victories and the program's first-ever national ranking. Prior to his time at High Point, Altman spent five seasons as an assistant coach at Division III Trinity University, helping to lead the Tigers to a winning percentage of nearly .900 over his five seasons on the bench. In his time as an assistant at Trinity, the Tigers made the NCAA Division III Tournament all five years and were national runners-up in 2007.

During his time coaching at Trinity, Altman was also head coach at Central Catholic H.S. in San Antonio, Texas, where he led the Buttons to three district championships and a pair of TAPPS state championships. In 2008, he was named the TAPPS 5A State Coach of the Year across all sports.

Altman played as a defender for Trinity from 2001 to 2004 and was integral in the Tigers’ NCAA national championship season of 2003. A team captain in 2004, Altman contributed to the success of a squad which amassed an overall record of 79-5-2 and set an All-Divisions record with 43 consecutive wins.