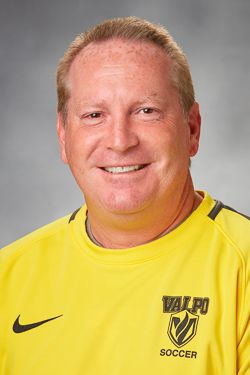 Chris Pfau completed his second season as Valpo's top assistant coach in 2018. He came to Valpo after spending the previous six seasons guiding the University of Houston women’s soccer program. Pfau was also the head women’s coach at Akron (2008-12) and Evansville (2005-06) before taking over at Houston.

“I’ve known Chris for the better part of 25 years,” Avery said. “He’s a longtime friend. He’s been one of my closest coaching confidants. He’s someone I’ve always talked to over the years about soccer, coaching, life and family. When I had the opportunity to bring him on staff, it was something I couldn’t pass up.”

At Houston, Pfau led the Cougars to their first postseason berth since 2010 in his first season. He coached Cami Koski to American Goalkeeper of the Year honors in 2013.

Pfau also had success during his time at Evansville, leading the Purple Aces to the 2006 Missouri Valley Conference Finals and the 2007 MVC Tournament. Evansville enjoyed the seventh-best improvement nationally in his first season in 2005.

Before his coaching tenure began, Pfau was a highly successful player at Old Dominion. He was a team captain, four-year starter and all-region honoree during his collegiate playing days, which spanned from 1985-89. Pfau went on to enjoy a lengthy professional playing career in the APSL, WPSL and WSL from 1989-99.