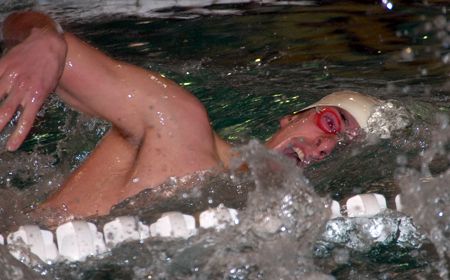 Valparaiso won six events for the second straight day on Saturday afternoon, but was unable to break through with a victory as the Crusaders dropped a 177.5-101.5 meet against Eastern Illinois finishing their weekend road trip in Charleston, Ill.

Adam Jajtner (Port Washington, Wis./Port Washington H.S.) led the way for the Brown and Gold’s swimmers, winning a pair of events.  The senior started his day cruising to a 25-second victory in the 500 freestyle with a time of 10:14.82, a season’s best mark by more than six seconds.  He then doubled up the victories with a triumph in the 500 free, turning in a time of 4:57.28.

Diver Kurtis Malone (Pekin, Ill./Pekin H.S.) also won a pair of events on Saturday for the Crusaders.  Malone posted a pair of season high scores on the afternoon.  He began the day scoring 247.60 points on the one-meter board, and followed that up with a 209.61 mark on the three-meter.

The other Valpo victory came from Victor Sikorski (Valparaiso, Ind./Wheeler H.S.) in the 50 free as the freshman outtouched the Panthers by 0.10 seconds to win in 22.00 seconds.

Austin Hunter (La Crescent, Minn./La Crescent H.S.) earned a runner-up finish for the Crusaders in the 200 backstroke with a time of 2:04.15.

Valparaiso (0-9) will wrap up the home portion of its 2008-2009 schedule on Friday afternoon, hosting Cleveland State at the Athletics-Recreation Center pool.  The first event begins at 1 p.m.