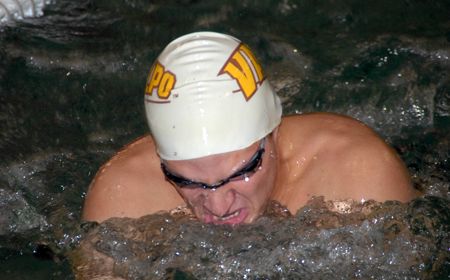 Led by three victories by David Sivak (Hobart, Ind./Hobart H.S.), including a school record, Valparaiso won eight events on Sunday afternoon, and picked up its first win of the season, defeating IUPUI 138.5-132.5 in Indianapolis, Ind.

Jajtner also posted the first win of the day in the 1000 freestyle with a 19-second triumph, touching the wall in 10:10.13, a season’s best by more than four seconds.

Ansel Hillmer (Tampa, Fla./Hillsborough H.S.) added a win for the Brown and Gold in the 50 butterfly with a time of 24.52 seconds.

Valpo closed the meet winning the 400 freestyle relay by more than four seconds as well as Jajtner, Sikorski, Edwards, and Sivak finished with a time of 3:14.66.

Valparaiso (1-10) will have several weeks off now before heading to Milwaukee, Wis. for the Horizon League Championships which will take place February 25-28.