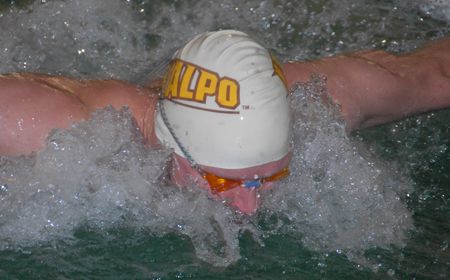 After setting a school record in three events on the opening night of competition, Valparaiso returned to the water on Thursday to break three more school marks at the Horizon League Swimming and Diving Championships held in Brown Deer, Wis.

Adam Jajtner (Port Washington, Wis./Port Washington H.S.) broke his second individual record of the championships with an 11th place finish in the 500 freestyle, touching the wall in 4:38.19.  He shattered his own previous school mark of 4:44.52 set in 207 by more than six seconds.  The senior set a school mark in the 1,000 freestyle on Wednesday night as well.

Blake Edwards (Orange, Calif./Lutheran H.S. of Orange County), turned in the third fastest time ever in the 500 free as well with a mark of 4:47.92 while Trevor Trimpe (Connersville, Ind./Connersville H.S.) moved into fourth all-time with his time of 4:49.35.

The Crusaders also set their third relay record of the event, doing so in the 400 medley relay on Thursday.  The team of Austin Hunter (La Crescent, Minn./La Crescent H.S.), David Sivak (Hobart, Ind./Hobart H.S.), Ansel Hillmer (Tampa, Fla./Hillsborough H.S.), and Victor Sikorski (Valparaiso, Ind./Wheeler H.S.) touched the wall in 3:29.12 to place sixth, and better the 2006 school mark of 3:31.25 by more than two second.

Sivak broke the school's 200 individual medley mark in the afternoon, posting a time of 1:53.35 while swimming a time trial.  He bettered Dave Peterson's 2006 mark of 1:55.43 by more than two seconds.

Sikorski and Sivak also moved themselves into the top-three all-time in the 50 freestyle on the night.  Sikorski moves into second place after finishing 21th overall with a time of 20.80 seconds.  He even bettered that mark in preliminary heats earlier in the day with a time of 20.77 seconds.  Sivak moved into third on the Valpo charts with his time of 21.10 seconds as well.

Kyle Verage (Hubertus, Wis./Marquette H.S.) was Valpo’s lone competitor in the 200 individual medley on the night, turning in a time of 2:05.65 while Kurtis Malone (Pekin, Ill./Pekin H.S.) placed 12th on the one-meter diving board with a score of 202.75 points.

Valparaiso will dive back into the water for day three of competition on Friday morning as preliminary heats begin at 10:30 a.m.   Finals are scheduled for 6:30 p.m. in the evening.