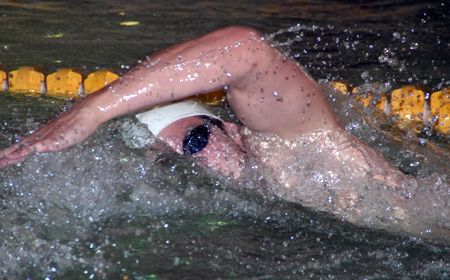 David Sivak was a part of both school records on Friday evening. (Ray Acevedo)
Related Links

Valparaiso continued its assault on the school record books on Friday, setting two more team marks on day three of the Horizon League Swimming and Diving Championships held in Brown Deer, Wis.  The Crusaders have now set eight new school marks with one day of competition to go.

Jajtner also set the second fastest 400 individual medley mark in school history in the preliminary heats on Friday morning, turning in a performance of 4:11.88.  Hunter also moved among the top-five in the 100 butterfly with his effort of 53.08 seconds.

Victor Sikorski (Valparaiso, Ind./Wheeler H.S.) moved into ninth place all-time on the 100 breaststroke charts with a time of 1:01.41 while Kyle Verage (Hubertus, Wis./Marquette H.S.) had the team’s top time in the 100 backstroke, touching the wall in 55.10 seconds.

Valparaiso will close out the 2008-2009 season on Saturday with day four of the conference championships.  Preliminary heats begin at 10:30 a.m. with the finals set for 6:30 p.m.