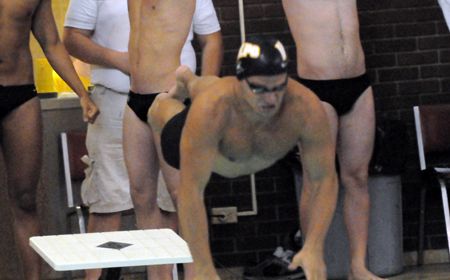 Valparaiso’s men’s swim team returned to the water on Friday evening for the first of three straight days of competition, beginning with a double dual meet in Indianapolis.  The Crusaders came out on the short end of both meets, falling 63-42 to host IUPUI and 89-24 to Saint Louis at the IUPUI Natatorium.

David Sivak (Hobart, Ind./Hobart H.S.) took home top honors twice on the evening for the Crusaders.  He began his day in the 50 freestyle, winning by more than a second.  His time of 21.15 seconds was his best of the season, and just 0.05 seconds off of his career best.  The senior then made it two wins for the day in the 100 butterfly with a 0.56 second win, posting a time of 52.32 seconds.

Tate Wegehaupt (Tigard, Ore./Tigard H.S.) also earned an individual victory for Valpo with a narrow 0.14 second triumph in the 200 individual medley.  The freshman touched the wall in 2:01.95, a season’s best.  Wegehaupt also earned a runner-up finish in the 100 breaststroke with a time of 1:00.57, trailing only a swimmer from Saint Louis.

Harris, a freshman, turned in his season’s best effort in the 200 IM with his time of 2:08.83 while senior Toshko Ganzorigt (Ulaanbaatar, Mongolia/Orchlon H.S.) posted a career best in the 100 breast, finishing in 1:09.33.

Valparaiso (0-8) will continue its busy weekend of action with a home meet on Saturday.  The Crusaders host UIC at 1 p.m. at the Athletics-Recreation Center pool.