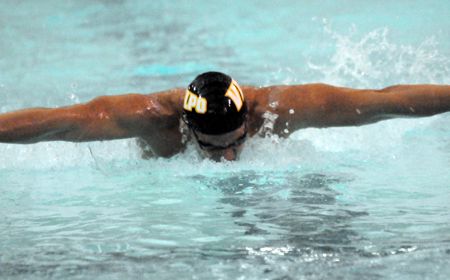 David Sivak set school records in the 100 back and 400 IM on Sunday. (Ray Acevedo)
Related Links

Swimming for the third straight day, Valparaiso earned a third place finish at the Butler Invitational on Sunday afternoon.  David Sivak (Hobart, Ind./Hobart H.S.) won his fifth individual event of the weekend, setting a new school record for the Crusaders in the 100 backstroke while also breaking the school mark in the 400 individual medley.

The Crusaders finished with 308 points, trailing Xavier (Ohio), which won the meet held in Fishers, Ind. with 712 points, and Ball State which had 698 points.

Sivak broke his own school mark in the 100 back, winning the event by 0.75 seconds.  He turned in a time of 51.98 seconds, bettering his mark from last season of 52.16 seconds.  In the only individual event of the weekend that Sivak did not win in which he competed, the senior posted a third place finish in the 400 individual medley with a time of 4:09.21, breaking the 1979 mark of 4:10.96 set by Seth Bretscher.

Steve Booth (Saint Joseph, Mich./Saint Joseph H.S.) added a fifth place finish for the Crusaders in the 1650 freestyle, turning in a season’s best time of 18:39.61.

Valparaiso will close out the home portion of the 2010-2011 season next Saturday afternoon, hosting IUPUI.  The meet begins at 4 p.m. at the Athletics-Recreation Center pool.