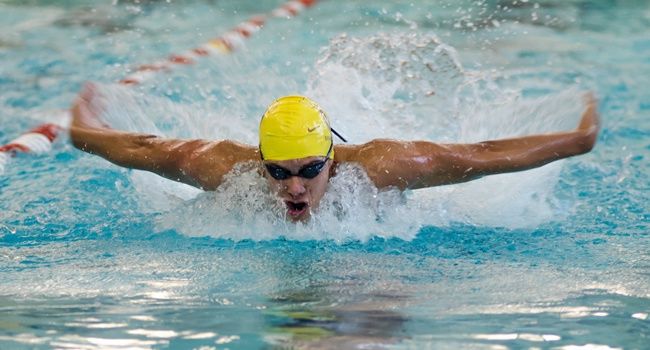 Gonzalo Castro Diaz (Mexico City, Mexico) is building on quite a freshman campaign.

The new kid on the block took the 100-yard butterfly in dramatic style Saturday.  Coming down the last leg, Castro Diaz reached out and touched the wall at 53.34 and smiled as he saw he had taken first place over Ryota Kuwahara and his 53.37 time.

Diaz's thrilling triumph came just a few events after fellow freshman Frederick Jenny (New Albany, Ohio/New Albany HS) claimed first place in the 200-yard freestyle.  Jenny clocked a 1:47.17 time, a little more than a half second ahead of Mike Reed of UIC at 1:47.76.

Valpo also took all 17 points in the 200-yard freestyle relay later in the afternoon.  While the victories symbolize distinct progress on an individual and team level, the Crusaders still dropped the meet 119-86.

The Flames won all other events en route to a 126-76 victory.

The men and women's teams will next compete against Olivet Nazarene in Bourbonnais, Illinois Friday, February 1st.  The two teams will then come back to Valparaiso the following day where Butler will join the two teams in a three-team meet.