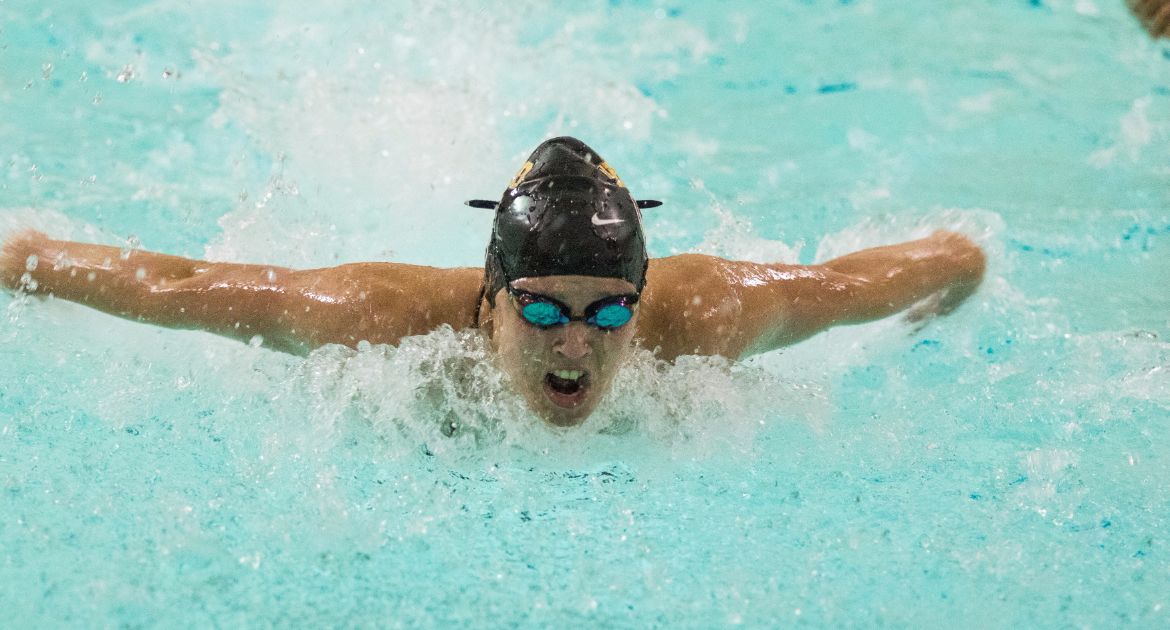 The Valparaiso University men’s and women’s swimming teams continued their early-season slate on Saturday as they made a trip to Green Bay, Wis. to take on the host Phoenix and the UIC Flames.

The day started off with the women’s 200-medley relay. The top team for Valpo was led by freshman Megan Lugar (Fishers, Ind./Hamilton Southeastern) swimming the backstroke leg, followed by classmate Mariah Sturdivant (Chicago, Ill./George Westinghouse Prep.) taking on the breaststroke leg, then sophomore Erica Martins (Hartland, Wis./Lake County Lutheran) in the butterfly leg, and sophomore Paige Wright (Surprise, Ariz./Paradise Honors) anchoring with the freestyle leg. They compiled a time of 1:57.95.

In the women’s 1000-free, senior Vinnie Zaia (Canton, Mich./Salem) swam the longest race of the meet in 11:35.63 as the top finisher for the Crusaders, while junior Dylan Kirar (Arvada, Colo./Ralston Valley) broke through with the fastest time for the Valpo men in 10:04.67.

Moving on to the 100-back, Wright finished fourth recording the best time for the Valpo women in 1:01.13. Penn found the wall in 56.94 for the top Crusader time on the men’s side.

The quickest time for the Valpo women in the 100 breaststroke was 1:13.75 by sophomore Emily Baumgartner (Fishers, Ind./Fishers). The top time on the team for the men was 1:02.35 registered by Acero.

Rookie Lillia Pogue (Corpus Christi, Texas/Flour Bluff) brought in the fastest Crusader time for the women in the 200-fly at 2:23.06, while Ogle did the same for the men clocking in just under two minutes at 1:59.38.

Sprinters, Martins for the women and Harrison Jenny for the men led the Crusaders in the 50-free with times of 25.56 and 23.33, respectively.

The women’s 100-free saw Wright lead the way again for Valpo, touching the wall with a time of 55.82. Sophomore Austin Scheer (Indianapolis, Ind./Bishop Chatard) took top honors for the Crusader men, stopping the clock at 51.49.

Sophomore Tara Lawson (Mundelein, Ill./Mundelein) led the charge for the Crusaders in the women’s 200-back, reaching the wall in 2:17.57. It was Penn with the fastest time on the team for the men in a time of 2:04.90.

In the women’s 200-breast, Baumgartner once again stopped the clock first for the Valpo women with a time of 2:36.99, while Sogandares did the same on the men’s side by touching the wall in 2:18.18.

To finish things off in the 400-free relay, the Valpo foursome of Wright, Lugar, Pogue and Amanda Jenny posted a top time for the team at 3:50.63. Sogandares, sophomore Spenser Shaffer (LaPorte, Ind./LaPorte), Bretl and Harrison Jenny led the Crusader men by compiling a time of 3:21.69.

Valpo returns to action next Saturday at the Indiana Intercollegiates, hosted by Purdue in West Lafayette. The meet is slated to start at 11 a.m. CT.