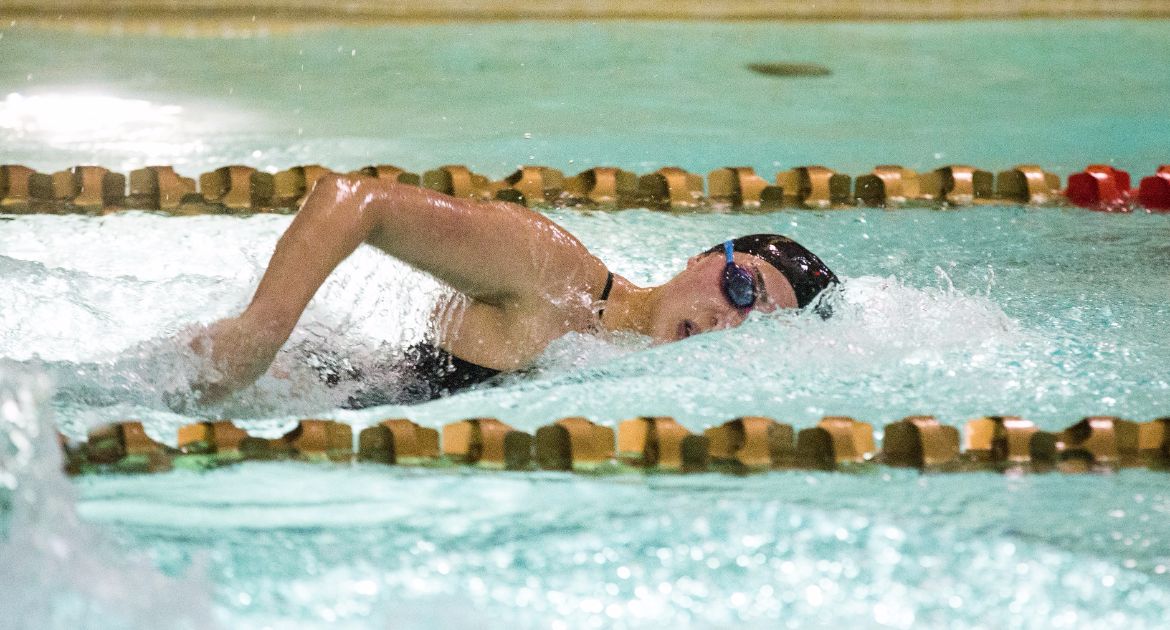 The Valparaiso University swimming teams took to the Morgan J. Burke Aquatic Center on Saturday to compete against several schools around the state at the Indiana Intercollegiates meet on the campus of Purdue University. Sophomore Paige Wright (Surprise, Ariz./Paradise Honors) led Valpo with a team-best sixth-place finish in the 100-free for the women. Junior Dylan Kirar (Arvada, Colo./Ralston Valley) came in seventh place in the 200-IM, the best finish for the Crusader men.

Among the field were the host Boilermakers on the men’s side only, as well as Wabash. DePauw, Evansville, Rose-Hulman and Manchester included both men and women, while Ball State and Indiana Wesleyan only fielded a women’s squad.

Senior Amanda Jenny (New Albany, Ohio/New Albany) led the Crusaders in the 200-free with a time of 2:03.94, while junior Mac Sogandares (Reston, Va./South Lakes) had the top time for the Valpo men, touching the wall in 1:49.05.

In the 50-free, freshman Mariah Sturdivant (Chicago, Ill./George Westinghouse Prep.) was fastest on the women’s team, coming in at 26.67. Harrison Jenny led the way for the men in a time of 22.99.

Freshman Lillia Pogue (Corpus Christi, Texas/Flour Bluff) and Lawson took the top two spots in the 200-IM for the Crusader women, bringing in times of 2:23.16 and 2:23.72, respectively. Kirar’s 2:01.00 was good enough for seventh overall.

Wright touched the wall in sixth by .01 ahead of seventh, making her time a solid 55.58 in the 100-free. Sophomore Spenser Shaffer (LaPorte, Ind./LaPorte) led the men in this race, clocking in at 50.94.

Another fast time for Lawson came in the 100-back when she stopped the clock at 1:04.31, good for tenth place. Freshman teammate Megan Lugar (Fishers, Ind./Hamilton Southeastern) was close behind in 1:04.67. Penn registered the top time for the Crusader men with a time of 55.48.

Senior Vinnie Zaia (Canton, Mich./Salem) found the wall in the 500-free in a time of 5:38.80. The men had a strong showing in this race as three Crusaders made up the top-ten overall. Junior Bob Bretl (Wauwatosa, Wis./Marquette University H.S.) finished in seventh place with a time of 4:55.76. Sogandares swam to a personal-best time of 4:56.27, that put him in eighth overall. Kirar rounded out the trio with a tenth-place finish in 4:58.49.

The final individual event of the day saw Baumgartner put up an eighth-place finish in the 100-breast, checking in at 1:13.27. Acero was once again Valpo’s top men’s finisher, recording a time of 1:03.24.

The top 200-free relay for the Crusader women was made up of Wright, Pogue, Martins and Amanda Jenny. They combined for a time of 1:43.39 that was good for fifth overall and fourth in points with Evansville’s second relay removed. The men secured a tenth-place finish overall, however, after taking out Purdue and Wabash’s non-scoring relays, they scored sixth-place points. That group consisted of Shaffer leading off, followed by Sogandares, Kirar and Harrison Jenny in a time of 1:31.44.

The Crusaders will continue their season as they welcome Milwaukee to the ARC next Friday, Oct. 27 for dual meet action set to begin at 3 p.m.