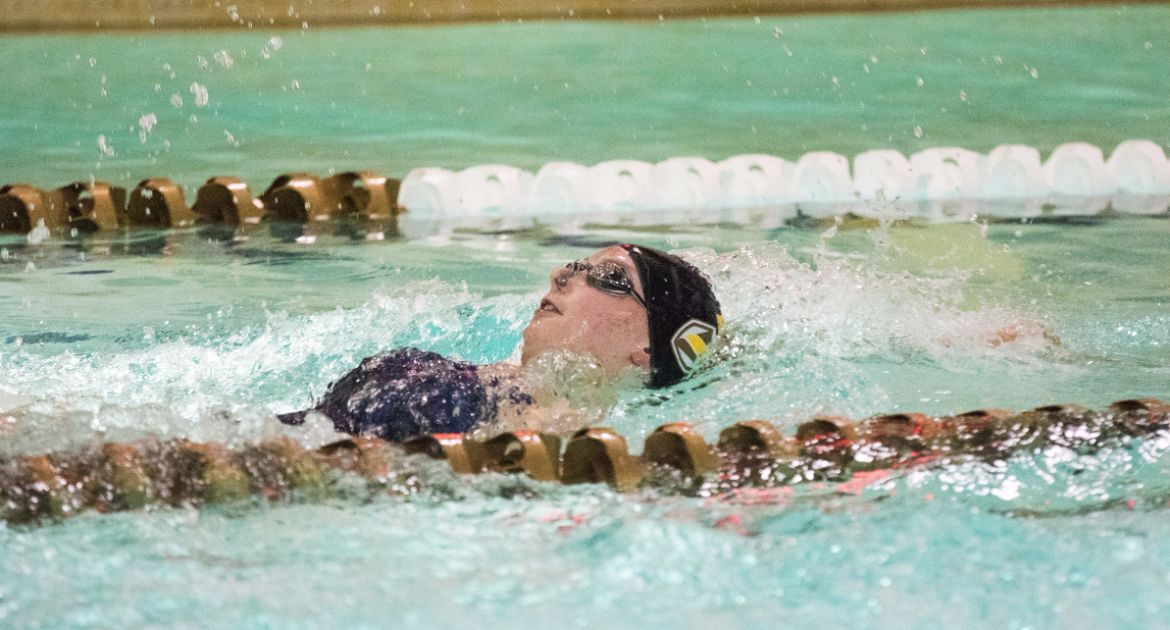 Tara Lawson moved into ninth in program history in the 400 IM Saturday.

The Valparaiso University swimming teams completed the three-day event in Kenosha, Wis. on Saturday. The Crusaders wound up third overall in the team standings for both men and women, while host Carthage College finished on top of both out of the 10-team fields. The third day of action saw Valpo swimmers move into the school’s all-time Top Ten list in as many days. Sophomore Tara Lawson (Mundelein, Ill./Mundelein) slid into ninth in the record books for the 400-IM, while freshman teammate Megan Lugar (Fishers, Ind./Hamilton Southeastern) climbed up to seventh all-time in the 100-back. The men’s 200-medley relay recorded the tenth-best time in Crusader history.

After a strong showing the past two days, junior Dylan Kirar (Arvada, Colo./Ralston Valley) continued his success with a second-place finish in the 400-IM with a time of 4:08.64. Sophomore teammate Brendon Johnson (Northbrook, Ill./Glenbrook North) followed up with a fifth-place finish, coming in at 4:13.08.

Junior Mac Sogandares (Reston, Va./South Lakes) stopped the clock at 1:45.59 in the 200-free, which placed him third overall. On the women’s side, senior Amanda Jenny (New Albany, Ohio/New Albany) posted a fourth-place finish in the 200-free, going 1:58.70.

In the 100-back, senior Grant Girten (Blue Ash, Ohio/Sycamore) touched the wall second with a time of 53.39. Sophomore Paige Wright (Surprise, Ariz./Paradise Honors) grabbed a runner-up finish, as well, coming in at 59.01 for the women. Lugar was right behind her in third, posting the seventh-best time in Valpo history at a time of 1:00.70. Wright already holds the Crusader record in this event.

Another runner-up finish for the Valpo men came when sophomore Dylan Ogle (Simpsonville, S.C./Mauldin) swam a 1:53.70 in the 200-fly.

Wright also added a fifth-place finish in the 50-free, reaching the wall in 25.16.

For the women, Lawson, sophomore Emily Baumgartner (Fishers, Ind./Fishers), freshman Lillia Pogue (Corpus Christi, Texas/Flour Bluff) and Amanda Jenny compiled a time of 1:53.57, which was good for third overall in the 200-medley relay.

In the final race, the 400-free relay, Sogandares, Kirar, junior Bob Bretl (Wauwatosa, Wis./Marquette University H.S.) and Harrison Jenny put together a time of 3:12.71. They finished in fourth.

In the 400-free relay, the women wound up third. The group of Wright, sophomore Erica Martins (Hartland, Wis./Lake County Lutheran), Lugar and Amanda Jenny had a time of 3:41.56.

The Crusaders will break from competition for the holidays before heading to Lewis University in Romeoville, Ill. for a dual meet with the Flyers on Saturday, Jan. 13 at 1 p.m.