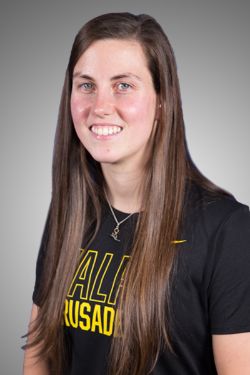 Miriam Wagner was hired as head coach of the Valparaiso University men’s and women’s swim programs in December 2017.

Wagner came to Valpo after spending two seasons as the primary assistant at Duquesne, where she was responsible for overseeing the distance and mid-distance training groups. The Dukes finished as the runner-up in the 11-team Atlantic 10 Conference in each of Wagner's seasons on staff.

Before beginning her coaching career, Wagner enjoyed a successful tenure in the pool as a member of the Duquesne team. She was a two-time Atlantic 10 champion in the 400 individual medley, made NCAA B cuts in the 400 IM and 200 breaststroke and shattered six school records – the 200 fly, 200 IM, 400 IM, 100 breast, 200 breast and 400 medley relay.

In addition, Wagner was a 12-time individual Atlantic 10 conference finalist and was named a mid-major All-American. She was a member of the Director of Athletics honor roll, dean’s list and the Atlantic 10 Commissioner’s Honor Roll while earning a bachelor of science in athletic training. After finishing her undergraduate studies in May 2014, Wagner completed her master of science in sports business from Duquesne in August 2017.