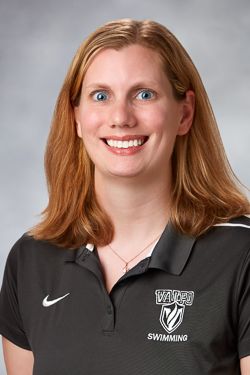 Maggie Kroemer returned to her alma mater as head coach of the Valpo men’s and women’s swimming program on August 19, 2019.

Kroemer helped lead Valpo to new heights in her first season back on Union Street, as the program set a total of 10 new school records - five on the men's side and five on the women's side. Included among those records was a record-setting swim by Dominic May at the Summit League Championships in the 200 free, a swim that gave him a runner-up finish and All-Summit League honors - the first All-League honoree for the Valpo men since 2006.

Kroemer's first season was also highlighted by not just success against the record book, but success in the competition as well. The program tallied seven dual meet wins over the course of the season - four by the women and three by the men - to far outpace victory totals in recent years. In addition, both the men (Summit League Championships) and the women (MVC Championships) posted their highest point totals in season-ending competition since moving to their respective conferences.