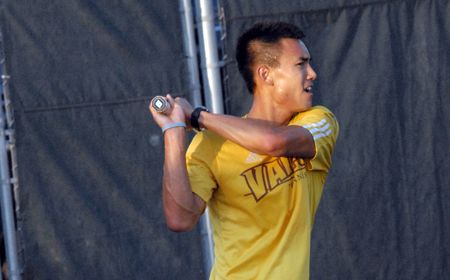 Valparaiso came out strong in doubles play on Friday, winning two of three matches, but managed just three victories in singles on the opening day of the Valpo Fall Classic held at the Valpo Tennis Complex.

“I was pleased with the start of the day winning two out of the three doubles,” head coach Jim Daugherty said afterwards.  “The singles turned out somewhat disappointing but we have to remember we’re playing quality competition in every match.”

In the B flight of doubles, Kyle Stump (Plymouth, Ind./Plymouth H.S.) and Phidias Fortune (San Antonio, Texas/New Braunfels H.S.) battled from 4-1 down to defeat Bryce Warnock and Andrew Nixon of Dayton 9-7 in the first round of action.  The duo advances to Saturday’s semifinals against Eric Plaushines and Brian Zaron of Green Bay.

Adam Whitmer (Shipshewana, Ind./Westview H.S.) also had success in doubles  play, teaming with Philip Dresden of Dayton.  The duo downed Steve D’Angelo and Brian Carey of Youngstown State 8-3, winning the final five games of the match in the C flight.  They advance to tomorrow’s championship match against Mike Wesley and Brian McCarthy of Green Bay.

The only Crusader duo to fall in doubles action on Friday was Alex Lau (Bloomington, Minn./Jefferson Senior H.S.) and Kevin DeHerrera (Littleton, Colo./Chatfield H.S.) dropped an 8-1 decision to Pjotrs Necajevs and Dustin Goldenberg of Detroit.  They will face Danny Wilson and Nate Kirk on Saturday morning in the consolation draw.

Despite the loss in doubles, Lau rebounded to win his first round match in the A singles flight.  The senior defeated Michael Kathary of Youngstown State 6-3, 6-2 to advance to the quarterfinals.  In his quarterfinal match against Matt Clegg of Green Bay, Lau dropped a 6-0, 6-2 decision.  Fortune also played in the A flight for Valpo, but dropped his first round match against Necajevs 6-1, 6-0.  Playing the consolation draw against Green Bay’s John Brough, Fortune then dropped a 6-2, 6-4 match.

Whitmer added to his successful day following the doubles win playing in the C flight of singles.  After earning a first round bye, he defeated Lukasz Chowaniec of Dayton 6-2, 7-6 (5) to advance to the semifinals on Saturday.  He will meet another Flyer, Michael Koscielski.

In the B flight of singles, the Crusaders had mixed success.    DeHerrera cruised to a 6-1, 6-1 triumph over David Stabley of Detroit in the opening round before seeing his tournament run end with a 6-2, 6-4 loss to Austin Wiegand of Dayton.  Stump dropped his first round match against Robert Emig of Youngstown Sate 6-2, 7-5 before suffering a very close loss to Matt Keesey of Green Bay in a match tie-break for the third set 6-3, 3-6, 10-6.