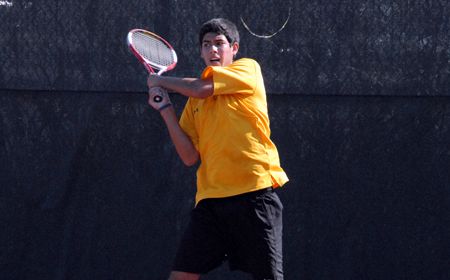 Kevin DeHerrera (Littleton, Colo./Chatfield H.S.) picked up wins in both singles and doubles on Friday as Valparaiso competed in the opening day of the Ball State Fall Invitational held in Muncie, Ind.

DeHerrera, playing in the B singles flight, posted a thrilling come from behind win in the first round against Stephen McLaughlin of Butler.  The freshman dropped the first set in a tie-breaker, and won the second set in the same manner on the way to a 6-7 (7), 7-6 (4), 10-7 win.  He dropped his round of 16 match later in the day, 6-2, 6-4 against Zach Skurupka of Duquesne.

“Kevin’s win against Butler was outstanding,” said head coach Jim Daugherty.  “It was a very good and exciting match to watch.”

DeHerrera also teamed with Alex Lau (Bloomington, Minn./Jefferson Senior H.S.) for an 8-6 victory over Gregory Sosa and Jorge Yunes of IUPUI in the A flight round of 16.

Lau dropped a pair of matches in the A singles flight on Friday.  In the first round he fell 6-2, 6-3 against Felip Miljevic of Illinois State before dropping a 6-3, 6-4 match against Griffin Nienberg of Purdue in the consolation draw.

Adam Whitmer (Shipshewana, Ind./Westview H.S.) also posted a first round win in singles action on the afternoon.   He then dropped a 6-4, 6-2 match against Mike Koscielski of Dayton in the second round. The rookie was a 6-2, 6-1 winner against Nate Veselenak of Cleveland State in the round of 32 in the D flight.

Besides DeHerrera, Phidias Fortune (San Antonio, Texas/Madison H.S.) also competed in the B flight, but lost two matches.  He dropped a 6-2, 6-3 contest against Yunes before falling 6-1, 6-1 to Matyas Hilgert of Eastern Illinois.

Stump and Fortune teamed to drop a tough C doubles match to Paul Foley and Matt Manasse of Purdue 9-7 as well.

“We’re playing good doubles but overall we continue to be streaky,” Daugherty added.  There’s some good stuff happening, but just not enough.”

Valparaiso, which has been eliminated in all of the singles draws, will continue with doubles play on Saturday.  Action begins at 7:30 a.m. CDT.