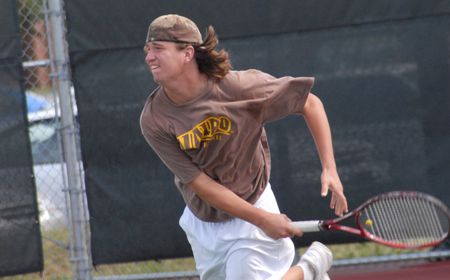 Alex Lau (Bloomington, Minn./Jefferson Senior H.S.) and Tom Litscher (Eau Claire, Wis./Memorial H.S.) teamed for a victory at number one doubles on Saturday evening, but that would be the only victory Valparaiso would record on the night as the Crusaders dropped a 7-0 match to Ball State at the Muncie YMCA in Muncie, Ind.

“Overall we played well today,” head coach Jim Daugherty said.  “We played much more relaxed and with determination and control.  Alex played great matches in both singles and doubles and is setting a great example for this team.”

The Cardinals swept the singles matches, but not without the Crusaders putting up a fight.  Lau dropped a tough 6-4, 6-3 contest against Perdomo at the top of the order while Rodriguez got by Litscher 6-3, 6-2 at the second spot.  Shaun Bussert defeated DeHerrera 6-0, 6-2 at number three singles while Cliff Morrison downed Stump 6-2, 6-4 in the fourth spot.  The tightest singles match came at number five as Whitmer forced a super tie-break for the third set against Carpenter before dropping a 6-4, 1-6, 10-4 contest.  Zane Smith added a win at sixth singles for Ball State, defeating Lyons, who was playing in his first collegiate singles match, 6-1, 6-3.

Valparaiso (1-3) will return to the courts on March 8 to begin its spring break trip in Orlando, Fla. facing Aquinas.