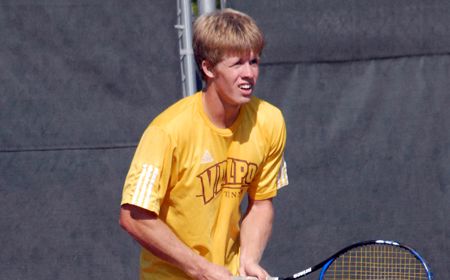 Adam Whitmer posted victories in both singles and doubles for the Crusaders. (Ray Acevedo)
Related Links

Valparaiso started strong on Monday afternoon, winning two of the three doubles matches, but ended up dropping a 6-3 contest with Shorter College on day two of competition during the Crusaders’ annual spring trip in Orlando, Fla.

Playing NAIA rules which score one point for each doubles victory as opposed to one point for the team that wins two out of three, the Crusaders jumped on top 2-1.  Kevin DeHerrera (Littleton, Colo./Chatfield H.S.) and Adam Whitmer (Shipshewana, Ind./Westview H.S.) topped Jordan Hubbard and David Araiza 8-2 at number three doubles to score the first point of the match.  Alex Lau (Bloomington, Minn./Jefferson Senior H.S.) and Tom Litscher (Eau Claire, Wis./Memorial H.S.) followed with an 8-4 triumph over Robert Benjamin and Bourrat Remi at the top of the lineup.  For Lau and Litscher, it was the duos fourth straight victory at the top of the lineup.The Hawks found the scoreboard at second doubles as Luis Quintero and Stanislas Rodier downed Kyle Stump (Plymouth, Ind./Plymouth H.S.) and Phidias Fortune (San Antonio, Texas/Madison H.S.) 8-5.

“This was our best start to a match this season,” head coach Jim Daugherty said.  “We came out in doubles with a lot of energy and then started the same way in singles.  We played well in singles, just couldn’t sustain it long enough to win.”

Shorter (7-3), ranked 13th nationally in the NAIA rankings, rallied in singles action to win five of the six matches and earn the victory, but not until after Valpo increased the lead to 3-1.  Whitmer posted a straight sets, 6-2, 6-0 win over Hubbard at the number six spot in the order, the freshman’s second straight win, and tying him for the team lead with five singles victories.

The Hawks then began their comeback.  Benjamin defeated DeHerrera 6-3, 6-2 at number three singles while Quintero was a 7-5, 6-2 winner at the fourth spot against Fotune.  Remi topped Litscher 6-4, 6-1 at number two singles while Rodier defeated Lau by the same score at the top of the lineup.  In the final match of the day, Stump forced Araiza to a third set at the fifth spot before falling 6-1, 4-6, 6-1.

Valparaiso (2-4) will return to action on Tuesday evening as the Crusaders will face South Dakota State in Orlando.  First serve is slated for 5:30 p.m. CDT.