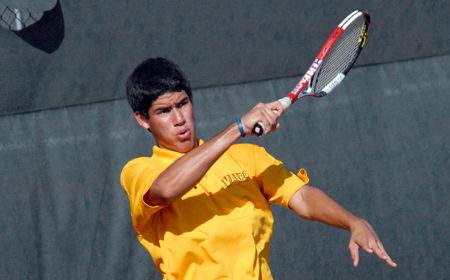 Playing singles first on Wednesday morning, Valparaiso rallied from a 3-1 deficit to tie the match, but ultimately dropped the deciding doubles contest in a tie-break to drop a 4-3 contest with Creighton in Orlando, Fla. to close out play on the Crusaders’ spring trip.

Trailing 3-1 in singles play, a pair of freshmen won three set matches to make the doubles point the decisive one in the match.  Kevin DeHerrera (Littleton, Colo./Chatfield H.S.) defeated James McAvoy 6-1, 4-6, 6-2 at number three singles to bring the Crusaders within one.  In the final match on the courts, Adam Whitmer (Shipshewana, Ind./Westview H.S.), down a set and trailing 4-1 in the second, rallied to defeat Brian Ward 3-6, 7-5, 6-0 and force the doubles point to be the deciding factor in the contest.

“That was an incredible win for Adam today, battling back to keep us in the match,” head coach Jim Daugherty said.  “The two freshmen really came through big for us and gave us a chance to win today.”

Creighton jumped in front early in singles.  Obermeier defeated Fortune 6-3, 6-2 at the fourth spot before Valpo’s Stump tied the match at one with a 6-4, 7-5 win at number five singles.  Nagy was a 7-6 (4), 6-3 winner over Litscher at the second slot in the order while Guerra defeated Lau 6-1, 6-4 at the top to set the stage for the remainder of the match.

Valparaiso (3-5) will now have a week and a half off before returning to action on Saturday, March 21 in Milwaukee, Wis. when the Crusaders battle Marquette.  First serve is slated for 1 p.m.