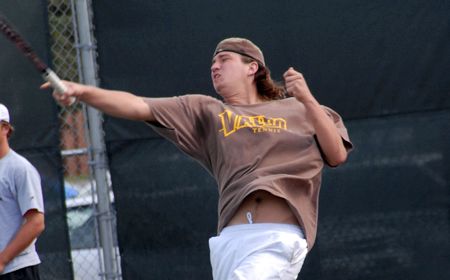 Building off of solid doubles play, Valparaiso won five of the six singles matches on Friday afternoon to defeat Detroit 6-1 at Matchpoint Tennis Club in Griffith, Ind. to record the Crusaders’ first Horizon League victory of the season.

“We really dug deep today to pull out the doubles point,” head coach Jim Daugherty said.  “It helped carry momentum into singles.  What a great team effort we had today.”

Whitmer increased Valpo’s lead with a 6-2, 6-2 victory over Stabley while playing at third singles for the first time in his career.  He moved over .500 on the season as well with an 11-10 record and has won four straight matches as well as eight of his last 10 overall.

DeHerrera made it 3-0 Crusaders with a 6-3, 6-0 triumph against McCathnye at the fourth spot before Necajevs put the Titans on the board with a 6-0, 6-2 win against Lau at number one singles.  Fortune clinched the match for the Brown and Gold with a 6-4, 6-2 win against Masuda at number six singles.  Stump then added a three set win, 6-1, 1-6, 6-2 at five against Tolomei and Litscher wrapped up the match with a 6-7 (5), 6-3, 10-5 victory against Goldenberg at the second spot.

Valparaiso (4-9, 1-2) will return to action on Saturday morning for a 10 a.m. match against Green Bay at the Valpo Tennis Complex.