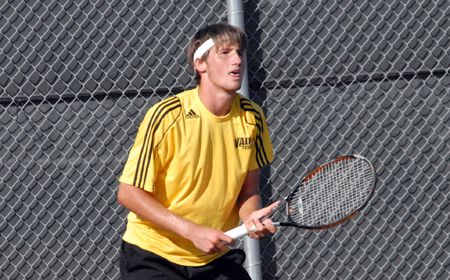 Adam Whitmer (Shipshewana, Ind./Westview H.S.) won his sixth straight singles match and Kyle Stump (Plymouth, Ind./Plymouth H.S.) also posted a singles victory on Wednesday afternoon, but it was not enough for Valparaiso as the Crusaders fell 5-2 to Butler at the Valpo Tennis Complex in the home finale.

Whitmer, who remains undefeated at 5-0 in Horizon League play, won for the 10th time in his last 11 matches, defeating Brandon Bayliss 6-4, 7-6 (4) at third singles.  Stump also needed a super tie-break for the third set to defeat Zach Ervin 2-6, 7-5, 10-7 at the fifth spot in the order.  Stump has won three straight matches now and improves to 7-3 at the fifth position.

The Bulldogs opened play sweeping all three doubles matches.  Ervin and Warren were 8-4 victors over Lau and Litscher at the top of the lineup while Theodor and Stephen McLoughlin topped DeHerrera and Stump 8-2 at two.  Herron and Bayliss added a 9-7 win over Whitmer and Fortune at third doubles.

“Even though we lost the match, I think the guys are starting to believe that they can compete with the top Horizon League schools,” head coach Jim Daugherty said.

Valparaiso (5-10, 2-3) will begin its final regular season road trip of the season on Saturday in Youngstown, Ohio.  First serve against Youngstown State is set for 1 p.m. CDT.