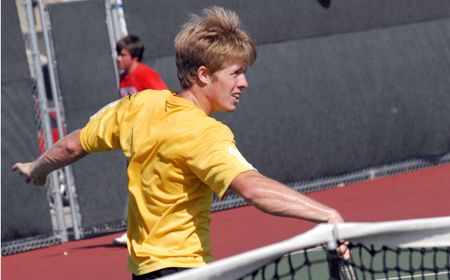 The doubles point proved to be crucial on Saturday afternoon and Valparaiso was able to take the point on its way to a 4-3 victory over Youngstown State at the YSU Courts in Youngstown, Ohio to move back to .500 in Horizon League action.

The Crusaders opened sweeping all three doubles matches for what would turn out to be the all important point.  Alex Lau (Bloomington, Minn./Jefferson Senior H.S.) and Tom Litscher (Eau Claire, Wis./Memorial H.S.) started the victory parade with an 8-5 victory over Steve D’Angelo and Tarig Ismail at one doubles.  Kyle Stump (Plymouth, Ind./Plymouth H.S.) and Phidias Fortune (San Antonio, Texas/Madison H.S.) secured the point with an 8-6 win at three over Robert Emig and Christopher Leson.  Adam Whitmer (Shipshewana, Ind./Westview H.S.) and Kevin DeHerrera (Littleton, Colo./Chatfield H.S.) completed the sweep winning by that same score against Patrick Hamning and Michael Kathary at the second spot.

“I was really pleased with the great start in doubles,” head coach Jim Daugherty said.  “All three teams are playing well right now and that was a much needed point.”

The Crusaders quickly increased their lead to 3-0 in singles play.  Fortune topped Leson 6-4, 6-0 at the bottom of the lineup while Whitmer added a 6-3, 6-2 win over Hamning in the third spot for his seventh straight win.

“Adam continues to win much needed points for us,” added Daugherty.

Valparaiso (6-10, 3-3) will wrap up the regular season on Sunday morning against Cleveland State with a 9 a.m. CDT contest in Cleveland, Ohio.