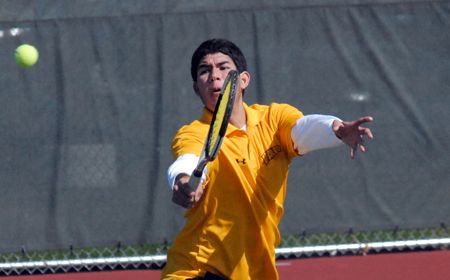 Valparaiso posted a 4-1 victory over Detroit on Saturday afternoon in Indianapolis, Ind. to advance in the consolation draw of the Horizon League Championships.

“We played really well today,” head coach Jim Daugherty said.  “We played with great composure under very adverse and windy conditions.  Our two freshmen really came through for us in the end.”

Fortune increased the lead to 2-0 Crusaders with a 6-0, 6-0 victory at number six singles against Masuda.  Necajevs cut the Valpo lead in half with a 6-1, 6-3 win over Lau at the top of the lineup, but the Crusaders quickly closed out the match.  DeHerrera downed Stabley 6-4, 6-0 at the fourth spot while Whitmer clinched the win with a 6-3, 6-3 triumph against McCathney at third singles..  Litscher led Goldenberg 4-6, 6-2, 3-0 at second singles while Stump had a 6-3, 1-4 lead over Tolomei at five when those matches were stopped.

With the victory, Valparaiso (7-12) will advance to Sunday’s fifth place match where the Crusaders will face Youngstown State in an 8 a.m. CDT contest.