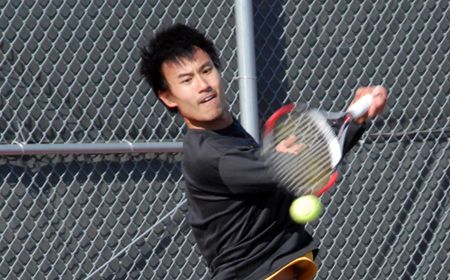 With the victory, the Crusaders, the tournament’s sixth seed, close the season with an 8-12 record overall, and winners of two straight.

Valpo had to fight hard to win the opening doubles point.  Youngstown State (6-17) defaulted at the third spot, but the Penguins posted an 8-4 victory at two as Rob Emig and Steve D’Angelo topped Adam Whitmer (Shipshewana, Ind./Westview H.S.) and Kevin DeHerrera (Littleton, Colo./Chatfield H.S.).  The Crusaders’ top team of Alex Lau (Bloomington, Minn./Jefferson Senior H.S.) and  Tom Litscher (Eau Claire, Wis./Memorial H.S.) came through though with an 8-6 victory over Tariq Ismail and Chris Leson to secure the point for Valpo.  Lau, the lone senior on the Brown and Gold’s roster, was playing in his final collegiate match on Sunday.

The Crusaders then battled to pick up the first three points in singles play to earn the victory.  With a default a six, Valpo needed to win just two more matches.  Kyle Stump (Plymouth, Ind./Plymouth H.S.) earned one with a 6-2, 6-4 victory over Leson at the fifth spot while Whitmer earned the other with his 6-3, 7-5 triumph over D’Angelo at third singles.  For Whitmer, a freshman, he finished the year with a team best 16-11 singles record.

The Penguins led in the other contests that were stopped when the match was decided.  Ismail had a 6-3, 5-2 lead on Lau at the top spot while Patrick Hamning led Litscher 6-2, 5-6 at two.  Emig had a 6-4, 5-2 lead on DeHerrera at fourth singles.

“Today wasn’t our best day of tennis for the season,” head coach Jim Daugherty said.  “I was proud of the guys though.  They dug deep to get the job done when they needed to.”