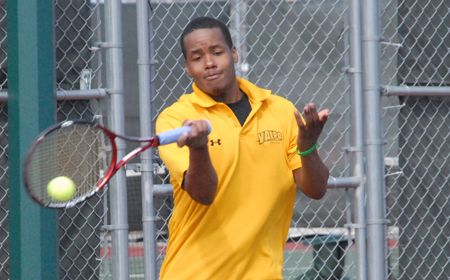 Valparaiso returned to the courts at the Hotels at Grand Prairie Invitational in Peoria, Ill. on Saturday afternoon, wrapping up play in the doubles competition while playing the first two singles matches of the tournament in each flight.

“I really appreciate the effort the guys have put forth thus far and the way they are working,” head coach Jim Daugherty said.  “At the same time we still have a lot of work to do to continue to improve.”

DeHerrera earned one of Valpo’s singles victories in the second flight.  He downed Matyas Hilgert of Eastern Illinois 7-6 (3), 7-5 in his second match of the day.  Earlier he fell 6-1, 6-1 to James McArthur of Saint Louis.

“Kevin was the brightest spot of the day,” Daugherty said.  “He played really hard to come up with a big win against Eastern Illinois.”

Mehta also won his first singles match of the year, needing a super tie-break to down Justin Haag of Eastern Illinois 6-3, 5-7, 10-4 in the fifth singles flight.   He also held a 7-6, 3-2 lead on Richard Robertson of Bradley in his second match before getting injured and being forced to retire in the super tie-break, falling 6-7, 6-3, 7-0.

“Siddarth got of to a great start today,” Daugherty said.  “Unfortunately he ended up hampered with the injury.”

Litcher, Whitmer, Stump, and Lyons each dropped both of their Saturday singles matches.

Valparaiso will conclude play at the tournament on Sunday morning beginning at 9 a.m. with two more singles contests for each player.